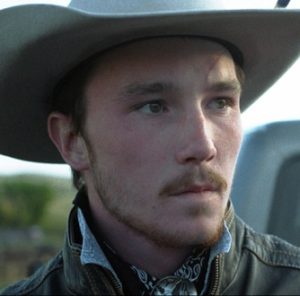 Think of every possible convention of a rodeo film (if, in fact, that is a genre in and of itself).  Now throw them out the window.  The result is Chloe Zhao’s mesmerizing paean to the roughest of sports, “The Rider” – a surprisingly rich and peaceful work which features almost no scenes of actual rodeo competition.  Instead, “The Rider” pays homage to the devoted athletes and thrill-seekers who give their very existences to a life of danger and triumph.

Actual rodeo cowboy Brady Jandreau essentially plays himself as Brady Blackburn, a determined bronco-buster recovering from what he eventually learns is a career-ending fall.  We see Brady remove the staples from his own head.  We see Brady argue with his father Wayne (played by Brady’s real-life father Tim Jandreau) about his future as a wrangler.  We see Brady interact with his biggest fan – his younger sister Lilly (again, Brady’s real-life sister Lilly Jandreau), who suffers from Asperger’s Syndrome.

Eventually we are privileged to witness Brady taming a wild horse – a 90-minute real-time exercise montaged into a two-minute sequence by Zhao and her editor Alex O’Flinn.  This accurate and alluring mosaic is, for me, the highlight of the film, as it depicts the love and dedication these riders possess for their craft.  For these folks, rodeo isn’t merely a job – or even a career.  Rodeo is a way of life.

But “The Rider” is not a documentary.  It is a brilliantly scripted peek into a life most of us will never experience.  The fact that these “actors” are playing themselves, while perhaps providing an added dimension of realism, is inconsequential to the overarching scope of the film.  In other words, the self-portrayals do not make “The Rider” a classic any more than the same technique was that which ruined Clint Eastwood’s recent bomb “15:17 to Paris.”

No, what makes “The Rider” a classic is that Zhao lays bare the dedication its subjects show for the experience which has the potential to ruin their lives through severe injury.  The fact that she was born and raised in Beijing – and therefore had no personal access to American cowboys – is as remarkable as the fact that this is only her second film.  (Her first was 2015’s “Songs My Brothers Taught Me.”) 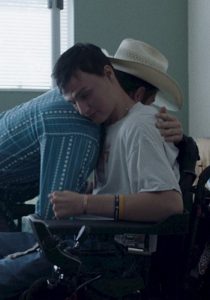 As Brady comes to grips with the idea that his career may be over at a young age, he takes a job at the local grocery store – only to be recognized by a young Lakota Sioux rodeo fan.  As Brady wrestles with his burning desire to return to the ring, he pays frequent visits to Lane Scott – a fellow rider left paralyzed and unable to speak from a recent accident.  Lane communicates via sign language, and the “conversations” between Brady and Lane are some of the most touching in modern motion picture history.  Lane is played by himself.  In other words, Lane Scott is an actual former bull rider left paralyzed and unable to speak from a horrific accident.

The scenes between Brady and his autistic sister Lilly are also heartwarming, and they serve the same purpose as those between Charlie and his horse in the recent “Lean on Pete” – to allow the protagonist to verbalize his feelings.  The fact that Lilly is able to respond, albeit in a juvenile manner, adds an extra dimension of pathos.

“The Rider” is as perfect a depiction of the rodeo life as has ever been put on the big screen (again, with only fleeting scenes of actual rodeo).  “The Rider” is as good as Sydney Pollack’s 1979 film “The Electric Horseman” was bad.  That picture paired two good-looking actors (Robert Redford and Jane Fonda) playing their stock characters, and took two hours to make the same point Glen Campbell made in three minutes of his “Rhinestone Cowboy” song.

“The Rider” employs a grand total of zero actors (who are therefore devoid of any “stock characters”), reaches for mammoth heights, and succeeds tremendously.  It is to cowboy life what “Moonlight” was to that of the ghetto.  “The Rider” is one of this year’s early masterpieces.