Memphis based psychedelic rock outfit, Spaceface, will appear Tuesday, May 15th at Square Cat Vinyl in Fountain Square.  Spaceface has premiered their first new music since the release of their critically-acclaimed Sun Kids on Substream Magazine. “Sky And The Road” takes listeners another notch further down the rabbit hole that Spaceface opened up on Sun Kids. It’s full of exuberant, vibey synths and guitars – all orbiting a laid back beat that propels the song into another stratosphere of exploration and positivity. “Sky And The Road” proves once again that Spaceface is a master of constructing a new headspace for listeners that simultaneously serves as a method of escapism and a reassurance that life is a beautiful thing. You can listen to “Sky And The Road” now on Soundcloud and physical copies of the single are available at PIAPTK.com. Stay tuned for new music from Spaceface later on this year.

Jake Ingalls’ recipe for “Sky and the Road”

Finish with cathartic bliss for a refreshing summer session punch 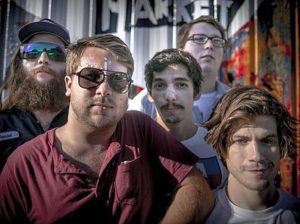 Spaceface is fronted by Flaming Lips guitarist, Jake Ingalls. They have quickly garnering a reputation for innovation both in their live show and psych-infused brand of indie rock since the release of their debut full-length, Sun Kids, last year. Sun Kids  features collaborations with Mikaela Davis and Julien Baker among others and was co-produced by Jarod Evans, best known for his production work with the band Broncho. According to Ingalls, Evan’s production style “really glued the whole thing together for me. If you listen to Broncho’s stuff next to ours, you can definitely hear his vintage gear influence”.