“Rawness improbably balanced by a mixture of danger and delicacy,” says one Rolling Stone writer, “is what gives Citizen Cope his edge. As a singer, songwriter, and producer, he stands alone—an artist immune to corruption.” Join the Indianapolis Symphony Orchestra as we embark on a new brand of concert experiences – Uncharted – with Citizen Cope on May 12, 2018.

About the UNCHARTED concept

Uncharted – a concept generously supported by The Margot L. and Robert S. Eccles Fund, a fund of Central Indiana Community Foundation – will allow the ISO to further develop its national reputation as an artistic innovator and incubator for new music. The orchestra is using this platform to explore new ways to connect with wider audience groups and create connections with musical artists from outside of the traditional orchestral scope. The ISO is establishing Uncharted as a vehicle to join forces with musicians who might not otherwise perform for an orchestra audience and help them to create new performance opportunities – whether through the creation of orchestral scores for their original works or, in the case of Citizen Cope, through collaboration with ISO Artists-in-Residence Time for Three. 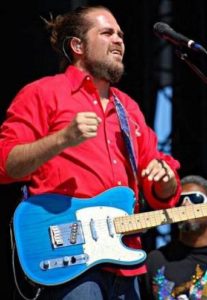 Citizen Cope (Clarence Greenwood) is an American songwriter, producer and performer. His music is commonly described as a mix of blues, soul, folk, and rock. Citizen Cope’s compositions have been recorded by artists as varied as Carlos Santana, Dido, Pharoahe Monch, and Richie Havens. He currently records and produces for his own record label, Rainwater Recordings, which he founded in 2010 after deciding not to work with major labels any longer.

The move allowed him to exert full creative control over his music and career, free from the marketing entreaties of the major record labels he previously had been signed to. He released The Rainwater LP that year, producing the entire album. “Let the Drummer Kick” from his 2002 album Citizen Cope went R.I.A.A. gold disc status. Citizen Cope released his latest album, One Lovely Day, on July 17, 2012. Cope is currently working on a new album.

About Time for Three

Time for Three will perform selections from their original repertoire, and starting the evening will be a special presentation by the ISO of new works by composers Andrew Norman and Nicole Lizée.

Tickets for the May 12 concert are on sale now; for more information, visit www.IndianapolisSymphony.org, or call the ISO Box Office at 317.639.4300.