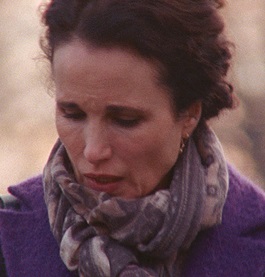 It’s always great to see Andie MacDowell in a movie, but when was the last time she really shined?  Keep thinking.  Yep, I can’t recall either.  It’s been 29 years since she first caught public attention with Steven Soderbergh’s classic “Sex, Lies, and Videotape.”  She followed that with “Green Card” and the Robert Altman gems “The Player” and “Short Cuts.”  But heck, it’s been a looooong time since she’s done anything substantial.  First time director Russell Harbaugh’s “Love After Love” may be just that picture that returns MacDowell to prominence.

Then again…  Still looking radiant at 60 years old (Can it be?), MacDowell plays Suzanne, the matriarch of a close-knit family, who loses her husband (a smoker with a decrescent voice, presumably to lung cancer) and then must re-group.  Her older son Nicholas (an insolent Chris O’Dowd) is a womanizing snob recently engaged to Emilie (Dree Hemingway) while still unable to let go of his ex, Rebecca (Juliet Rylance).  Younger brother Chris (comedian James Adomian) is an unattached writer of sorts, although it’s not completely clear exactly what he does for a living.

From an original screenplay by Harbaugh and Eric Mendelsohn, “Love After Love” provides no clear-cut answers as to how one should best overcome the loss of a loved one.  I have no issue with such ambiguity; my problem is the lack of cohesive structure.  Harbaugh and Mendelsohn give us 90 minutes of somewhat disconnected vignettes featuring various family members.  It’s as though we’re eavesdropping on family dinners, funerals, engagement parties, and so forth – during which life appears to go on unscathed by the loss of husband/dad. 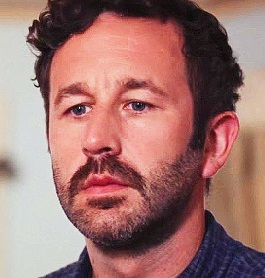 We see Nicholas lash out at family members and significant others, we see Chris drunk, we see Suzanne try to take it all in.  But never do we discuss the gaping hole furnished by recent death.  We see Suzanne continue her professional career.  We see her try her hand at dating and loving again – although we’re given precious little information about her new suitors.

We suffer through approximately two too many of Nicholas’ breakdowns.  Fortunately, Harbaugh and Mendelsohn never stoop to the “big scene” in which the family members air their respective dirty laundry.

But while I liked a lot of “Love After Love,” I never sensed the action was leading to any conclusion.  The screenplay meanders aimlessly in the wilderness of “characters without a plot.”  Perhaps that’s the point.  Perhaps we’re to equate the aimlessness of the film to the desultory ashes (literally and figuratively) of the death of a patriarch.  That’s a worthy strategy for what might have been an interesting piece of cinema.

However (and this is a criticism I almost never make), “Love After Love” seems too edited.  These disjointed episodes necessitate some connection – some discussion of “dad.”  There’s a proverbial elephant in the room which is never addressed.  It’s as though half this film is missing.  Is it on the cutting room floor, or was it never written in the first place?

I like Andie MacDowell.  Heck, I always like Andie MacDowell.  I would have liked to have seen more of her character.  What is Suzanne feeling?  What makes her tick?  I would have liked to see less of the O’Dowd character, and more of the Adomian character.  At the end, Chris finally lets loose some of the pent-up feelings of (a) the on-screen family, and (b) the audience, but it’s not enough to save this self-indulgent attempt.

I would be remiss not to mention the excellent soundtrack provided by the always reliable David Shire.  The airy yet occasionally somber piano strikes just the right chord for this material.  It’s rare I notice mood music.  I did this time.

Swing and a miss

I didn’t hate “Love After Love.”  It’s a valiant first directorial effort from Harbaugh.  But it’s not the return to prominence I had hoped for MacDowell’s career.