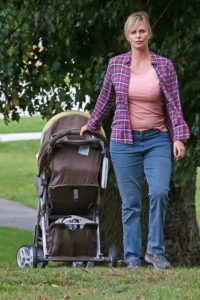 In Jason Reitman’s new film “Tully,” Charlize Theron plays Marlo, a young mother at her wit’s end.  Her kindergarten son exhibits autistic episodes although he seems “normal” most of the time.  Because of the extra attention he requires, Marlo makes an ancillary effort to bond with her third-grade daughter.

Her husband Craig (Mark Duplass) is a decent (albeit sometimes disconnected) family man, always ready and willing to help with homework.  Craig has a good job, but his work does require him to travel more than Marlo would like.  Add to this mix a new unplanned baby, and Marlo is about to come unglued. 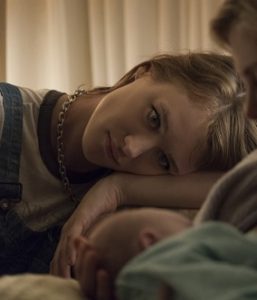 At the behest of her successful brother Drew (Ron Livingston), Marlo accepts his gift of a so-called “night nanny” – a certified au pair who spends her nights with the newborn so Mom can catch some much-needed sleep.  In this story, the nanny’s name (and the film’s name) is “Tully.”  Played with subtle acumen by Canadian actress Mackenzie Davis, Tully seems to be a dream come true.  She instantly bonds with the baby, brings the baby upstairs to the sleeping Marlo when it’s time for mother’s milk, and unabashedly watches until feeding time is over.  When Tully bakes cupcakes for Marlo to take to her childrens’ school, she even lets Marlo take the credit for baking them.

After a week of good sleep, Marlo is a different person.  No longer irritable, she now has time to clean the house and actually prepare dinner – rather than ordering pizza, as we see during the early scenes.

Reitman and screenwriter Diablo Cody are the team responsible for the 2007 classic “Juno” – in which Ellen Page starred as an independent, smart-beyond-her-years high schooler forced to make some tough choices upon becoming pregnant.  Davis plays Tully similarly, although less abrasive and more philosophical.  Tully is the type of twentysomething who can tell you your horoscope one minute, then recite Shakespeare the next.  She’d make a great “Jeopardy” contestant – she knows a lot about darn near everything, yet she doesn’t flaunt her intelligence.  Her acumen is the key to her success as a nanny.

Seems to be predictable

By now, you likely have a good idea where “Tully” is headed.  She’s a gem, Marlo and Craig rekindle their sex life, and the entire family lives happily ever after.  That’s what I thought too – and my fears were enforced when Marlo and her daughter performed Carly Rae Jepsen’s “Call Me Maybe” at a kids’ karaoke party.  When Tully and Marlo leave the baby with Craig one night to go out drinking, I practically had my review written.

But then a funny thing happened.  Reitman and Cody returned to the magic they created in “Juno” and took “Tully” in a far different direction.  The final third of this film is its saving grace (although much of the early dialogue is wickedly, spot-on funny).  I cannot tell you what happens, lest I spoil it for you.  But suffice to say “Tully” turns out to be a rare gem – a film that doesn’t talk down to its audience, and assumes a certain degree of intelligence to piece together the action of the final act.  This is one of those pictures that will have you clamoring to see it again.

Theron and Davis are great

Much as she did in “Monster,” Charlize Theron goes out of her way to not look beautiful.  And the result is her most nuanced performance since.  And Mackenzie Davis is perfect in the title role.  A “Juno” characterization would have been too biting and sarcastic; but play it too sweetly and the character becomes annoying.

Screenplay is the star

But the real star here is the Diablo Cody screenplay.  Sharp and witty, without ever condescending, the dialogue between Marlo and Tully is pointed, funny, and real.  It’s unfortunate Focus Features has chosen to release “Tully” so early in the year.  A fall or winter release would have solidified its opportunity to garner multiple Oscar nominations.  Instead, this film will have to rely on word of mouth to carry it through to next Oscar season.  It’s a strong enough picture such a shelf life is possible.  Here’s hoping this one’s the hit movie it deserves to be.