You Were Never Really Here

Joe is a hitman specializing in rescuing young girls from the sex trafficking trade.  Brilliantly played by an understated Joaquin Phoenix, Joe has genuine feelings for those he saves from danger.  He hallucinates about them long after his affiliation with them and their families had ended.  He feels the need to personally experience the danger in which he found them.  For example, Joe continues to see the image of a girl suffocating in Saran Wrap – and he continually wraps his own head in cellophane to participate in their own (sometimes short-lived) hell.  He comes achingly close to dropping a razor down his throat to engage in that of another.

Lynne Ramsay turns in her best directorial effort thus far in her adaptation of Jonathan Ames’ thriller “You Were Never Really Here.”  Aside from the superfluous modifier in the title, Ramsey’s film is one of this year’s best, although it works better as a character study than as a spine-chiller.  Phoenix’s Joe is his most provocative role since 2013’s “The Master.”  He’s tortured inside – with memories of his wartime experience, those of his young charges, and his elderly (and now mildly senile) mother.

While some have compared Joe to Robert DeNiro’s Travis Bickel in “Taxi Driver,” I find the two characters quite disparate.  First, Ramsay provides no voice-over narration, which was so crucial to our understanding of the DeNiro character.  Second, Joe’s motive is always to exact goodness in his deeds, no matter how violent.  Whereas Travis merely possessed the perception of decency, while his actions displayed quite the opposite.

Joe is a tortured yet decent man, and in the ironic twist of the ending, begins his journey of solace via the most incongruous character. 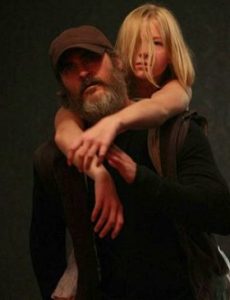 The modest plot – again, the calculated discovery of Joe’s backstory is the actual adventure here – involves his quest to rescue a New York state senator’s daughter from thugs who have kidnapped her.  The senator wants this process to occur discretely as he’s contemplating a run for governor.  Newcomer Alex Manette plays the politician, and Russian-American child actress Ekaterina Samsonov plays the daughter.  Hers is such a subtly nuanced performance it’s difficult to assess that she’s actually acting.  Of course, the same could be said of Phoenix, who essentially reprises the devil-may-care attitude he displayed in Paul Thomas Anderson’s “Inherent Vice,” albeit with a far more interesting character and storyline.

Again, the innerworkings of Joe’s mind, and that which has guided him to this self-imposed purgatory, is the meat of “You Were Never Really Here.”  I’m not saying this is a great film – but it’s certainly an alluring examination of one man’s psyche.  Truth be known, a little voice-over narration might have helped our understanding of the character.

“You Were Never Really Here” is dark, bloody, and wickedly beguiling.  It’s not for everyone’s taste, and, thanks to its early release, is likely to be forgotten by Oscar time.  But for those fascinated by personality examinations, this is almost a must-see.