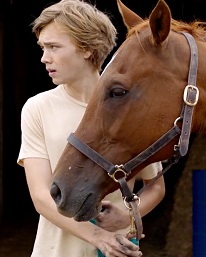 Charlie’s mother left him so long ago he doesn’t even remember her.  His dad Ray is well-meaning but essentially a loser.  Ray drifts from job to job, dragging young Charlie with him.  Ray’s bedroom is a carousel of women he works with or has met at local watering holes.  While Charlie is basically along for the ride, his dad does manage to impart a few nuggets of wisdom.

Charlie is too small for a lineman, but he is a receiver on his high school football team.  He also has a love for horses, and following a move from Spokane to Portland, enjoys watching them race.  Because of this equestrian fondness and because of his father’s propensity to live paycheck to paycheck, Charlie hooks up with a local horse owner one summer and finds himself a decent-paying job.  Almost immediately, he falls for a horse named Lean on Pete.

And there you have the premise for 2018’s best picture so far – Andrew Haigh’s “Lean on Pete,” at first glance, the story of a boy and a horse.  But lest you think for one minute this is the male version of “National Velvet,” let me advise you it is anything but.  This is not a story of a boy and his horse.  Heck, this is not even a story about a horse.  This is a story about a 16-year old boy (brilliantly played by Charlie Plummer, in his breakout performance) and his quest to find some stability in his life.  That a horse is his vehicle for this journey is almost gratuitous.

Another great performance from Buscemi

Following an extended period of time working for a horse owner on his career’s downward trajectory (Steve Buscemi, in his second fabulous performance this year, following Armando Iannucci’s “The Death of Stalin”), Charlie kidnaps Lean on Pete on the threshold of his being sold to Mexicans certain to send him to slaughter.  With no money, (initially) no destination, and (in essence) no family, Charlie embarks on a journey most 16-year-old would not attempt.  On the other hand, what has Charlie to lose?

The quiet, introspective middle third of “Lean on Pete” is that which establishes the film’s brilliance.  Charlie reveals his backstory and his emotional state in conversations with Pete during their journey, which eventually point in the direction of Wyoming – the location of Charlie’s aunt Margie, perhaps the only person who has ever loved him in the way a young boy needs.

I cannot comment on the final act, lest I divulge plot developments essential to the enjoyment of this quasi-masterpiece.  This is Andrew Haigh’s first film since 2015’s “45 Years,” another picture I enjoyed immensely.  But this one is (so far) the best of his career.  Not only has Haigh redefined the child/horse narrative, but he’s done it in a way that neither talks down to adult audiences nor diminishes the sense of wonder horses afford.

Again, Plummer is dazzling in his embodiment of the teen who’s never had as much as his peers, yet with a good strong head on his shoulders.  Charlie is the type who may break the rules on occasion, but only in the cause of what’s simply the right thing to do.  When he finally reaches the conclusion of his journey, he breaks down – in the knowledge that he’s played his life (so far) by the rules, even given the enormous impediments over which he’s had to mature. 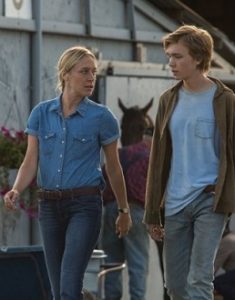 Buscemi is excellent, as is Chloe Sevigny as Buscemi’s star jockey.  The knowledge she imparts to young Charlie prior to his quest falls somewhere between motherly and sisterly.  Hers is perhaps the second most paramount role in “Lean on Pete.”  That of the horse is not.  Again, this is a coming-of-age story about a young man who just so happens to be on an expedition to save a horse.

and he serves as the radio film critic for IndyBoomer.com/IndyBoomerRadio