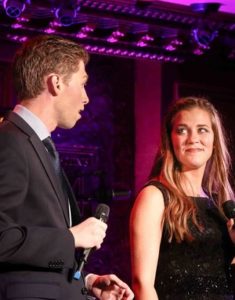 Two top alumni from the Great American Songbook Foundation’s Songbook Academy® summer intensive will join their mentor, five-time Grammy Award nominee Michael Feinstein, for his April 21 appearance at the Palladium at the Center for the Performing Arts. 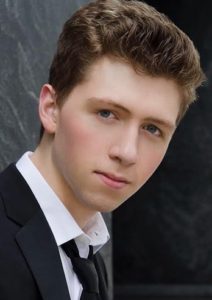 Upstate New York natives Nick Ziobro, 21, and Julia Goodwin, 19, each claimed the title of Songbook Youth Ambassador in 2012 and 2013, respectively. Since then, both have released albums as vocalists, competed on NBC’s America’s Got Talent, appeared at such venues as Carnegie Hall and Kennedy Center, and won praise from the New York Times, to name a few accomplishments. They have performed frequently with Feinstein and often as the duo Nick & Julia, and they look forward to returning to Carmel.

“It kind of feels like home, coming back,” says Ziobro, who graduated mid-year from Rider University and now lives in New York City, auditioning for musical theater roles. “We just want to show everyone how much we’ve grown and how much we appreciate everything that we have experienced down there.”

The Songbook Series concert begins at 8 p.m. April 21 at the Palladium, 1 Center Green, Carmel. Tickets starting at $35 are available at the Palladium Box Office, by phone at (317) 843-3800 or online at TheCenterPresents.org. Student tickets are just $15 for the event, part of the 2017-18 Center Presents Season sponsored by Allied Solutions.

The annual Songbook Academy brings 40 of the nation’s top high school vocalists to Carmel each summer for a week of workshops and performances under the guidance of performing arts and entertainment industry professionals. Feinstein, founder of the Songbook Foundation and artistic director for the Center for the Performing Arts, acts as lead mentor and arranges national debuts for the top participants. Ziobro and Goodwin are two of the most accomplished young singers to emerge from the program, he says.

“It’s a great joy to have played a small part in helping to bring their talents to the fore,” Feinstein says. “Nick is a naturally gifted musician, with perfect pitch and amazing instincts. He can sing any kind of music and inhabit it with a depth and understanding that belie his youth. Julia has charisma, talent, beauty and charm and is a songwriter as well. Her work ethic is extraordinary, and she has a voice that touches the soul.”

Ziobro was drawn to the timeless standards of the Great American Songbook while still an elementary-age piano student. Goodwin, a sophomore at Syracuse University in New York, fell in love with the classic repertoire through the Songbook Academy.

“I’m just really inspired by the way that these songwriters used to write,” she says, “and so I look at people like Cole Porter and Johnny Mercer and Irving Berlin, and I hope that I can tell stories in my songs just like they did.”

Learn more about these rising stars at www.nick-ziobro.com and www.juliagoodwinmusic.com.