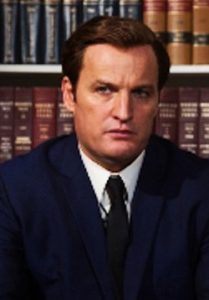 It is one year since the assassination of presidential candidate Robert Kennedy.  Apollo 11 has left earth for its historic landing on the moon.  And U.S. Senator Ted Kennedy accidentally drives his car off a bridge on Chappaquiddick Island in Massachusetts, killing political strategist and Kennedy family confidant Mary Jo Copechne.  After spending the remaining hours of the evening wandering about the island in deep thought, Kennedy spews forth (to no one in particular), “I’ll never be president.”  He was correct.  He was also disappointed and ashamed.

A motion picture about the life of the youngest male Kennedy would probably have been a fascinating study of grief, remorse, and the constant struggle to live up to the high standards of the Kennedy family name and the expectations that come with it.  Director John Curran has given us the next best thing – “Chappaquiddick,” a satisfying re-telling of the immediate aftermath of the accident which did not destroy, but certainly stifled a promising political career in its infancy.

As Kennedy, Australian actor Jason Clarke masters not only the cadence of the Kennedy family accent, but also the confusion of Kennedy as he mentally gropes with damage control.  “Chappaquiddick” is ultimately more a film about damage control than it is Kennedy’s mental battle, but Clarke’s embodiment of Kennedy’s immediate post-accident fog is strong.

McNamara shows Gargan and Markham how this is really done.  And McNamara’s forceful and decisive leadership eventually “awakens” Kennedy to the reality of his situation.  He then begins to “act like a Kennedy” for the first time in the entire film.  Even during the opening scenes, as Copechne (Kate Mara) and her staff of “boiler room girls” (those instrumental to Bobby’s 1968 presidential campaign) wildly encourage Teddy to run for president in 1972, Clarke’s Kennedy seems timid and unsure.

Curran’s film progresses somewhat by the numbers, but it does give us a little insight into Kennedy’s personal distress.  I would like to have seen Taylor Allen and Andrew Logan’s screenplay take us further into Kennedy’s career – perhaps through his 1980 campaign for the Democratic presidential primary race against President Carter.  How was Kennedy’s memory of, and public perception of, the Chappaquiddick incident playing into this race?  How did Kennedy overcome his demons enough to throw his proverbial hat in the ring 11 years after Chappaquiddick?  Perhaps this film necessitates a sequel.  If so, that’s one sequel I’d actually like to see.

Curran’s best directorial choice, I believe, is the early scene where Kennedy sits on the shore, having just swam to safety – deeply pondering his next move while Copechne drowns.  Having presented us with an opening sequence reviewing the deaths of Kennedy’s older brothers (Joe to WWII, Jack and Bobby to assassinations), Curran lingers on this scene just long enough for us to think of comparisons.  My mind immediately raced to a mental image of young naval officer John Kennedy swimming three miles to shore from the damaged PT-109 torpedo patrol boat, while towing a badly burned fellow crewman to safety.  And Teddy sits on the shore as Mary Jo Copechne drowns.

“Chappaquiddick” isn’t a motion picture the Kennedy family will embrace.  The Kennedys and their cronies are depicted as more driven to save the family reputation than the life of a young aide.  But Allen and Logan do diffuse any remaining rumors that Kennedy and Copechne were having an affair; and that Kennedy was stone drunk the night of the accident.  (He had only had a couple beers.)  Again, the point of “Chappaquiddick” is damage control.  And in our present political climate, that may be the most important message of all.