Count Bop & THE HEADLINERS, the foremost Rock-n-Roll Band in the continental United States, have been providing entertainment for various public and private functions since 1971. Count Bop brings their distinct Rock-n-Roll style to The Vogue (6259 North College Ave.) on Friday, April 6 at 9 p.m.

Tickets are on sale now ($15) at www.ticketfly.com and The Vogue Theatre box office. The show is ages 21+ only. 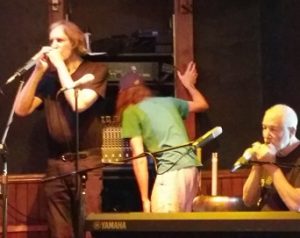 Originally known as Dr. Bop & THE HEADLINERS until 1990 when Dr. Newt Bop retired from active performance due to health issues. Count Feret de Monte Christo from Monaco Province then took the helm as Count Bop. The Count is one of the most prolific entertainers ever known or seen in the history of modern music.

Count Bop & THE HEADLINERS have been featured in Variety, Spin Magazine, The Chicago Tribune, The Milwaukee Journal, and Los Angeles Times. They have also performed for the British Royal Family, to many U.S. notables, and are considered to be one of the most amazing entertainment groups in the country today.