In 2011, author Ernest Cline had a brilliant idea:  What if there existed an alternative universe – one in which each “player” could assume a new identity, and act out various video games in cyberspace?  His novel “Ready Player One” has now been made into a major motion picture by Steven Spielberg, and while this choice might once have seemed obvious, such a selection of source material now seems pedestrian for the director who has blessed us with “Schindler’s List,” “Saving Private Ryan,” “Lincoln,” “Bridge of Spies,” and most recently, “The Post.”  “Ready Player One” harkens back to Spielberg’s early years, when special effects and plot often overtook his films at the expense of character development. 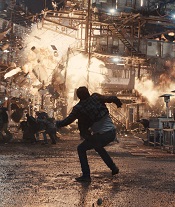 In a plot set-up complex enough to require fifteen minutes of background provided by voice-over narration, Zak Penn and Ernest Cline’s adapted screenplay then thrusts us into virtual-reality software at a dizzying pace, as our senses are bombarded by bright, flashy visuals and ear-numbing sounds at video-game warp speed.  The first alt-universe action sequence sets the stage for the long drawn-out third act which (much like Quentin Tarantino’s “Django Unchained”) keeps coming back for more finales.  In fact, when the corporate bigwig bad guy is defeated in virtual reality, he then must be defeated again in real life.

If this all sounds quite confusing, “Ready Player One” is not quite as hard to follow as you might think.  Before he died, brilliant and entrepreneurial geek James Halliday (Mark Rylance) developed OASIS, an alternative universe in which people from all over the world could essentially play one great big virtual reality video game rather than personally connecting with others.  Tye Sheridan plays Wade Watts, an active OASIS player, in search of three “keys” and an “egg” Halliday planted in this surrogate cosmos, whose discoverer would then assume ownership and control of Halliday’s empire.

So yes, this is the exact same plot contrivance used by Willy Wonka to find an heir to his chocolate and candy fortune.  Wade is the innocent Charlie Bucket of the Willy Wonka story, and IOI (Innovative Online Industries) assumes the persona of Veruca Salt’s family business – devoting all its energy to cracking the hidden clues and discovering the elusive keys.

Ben Mendelsohn plays IOI’s corporate CEO Nolan Sorrento – himself an active OASIS player – who (in classic melodrama fashion) is presented as evil personified.  Olivia Cooke (outstanding in the recent “Thoroughbreds”) is Samantha, a smart and bold OASIS player who meets Wade in the alt-world first, then in real life.  In OASIS, Wade and Samantha are Parzival and Artemis – who don’t look anything like Wade and Samantha in real life.  It’s a little tricky to keep track of all the reality characters and their OASIS counterparts, but that’s all part of the fun (or frustration) of “Ready Player One.”

Wade and Samantha crack the hidden code by researching Halliday’s life – all of which was recorded on a virtual library, and is stored (apparently) where no other players (including all of IOI’s brain trust) has thought to look.  So now we have present, past, and alt-world cyberspace scenes, and it’s our job to keep straight who knows what information, and in what world or in what time period. 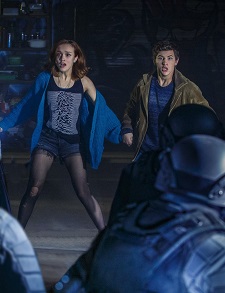 Unfortunately, many viewers won’t care, as the story structure in this type of film merely exists to set up the next action sequence.  Personally, I could have done with a little less plot, far fewer action scenes, and more development of character.  When the extrasensory onslaught occasionally recedes, the scenes of awkward young-adult interaction between Wade and Samantha provide a welcome release, giving us time to absorb the fact that these are real people – merely positioning themselves as others to cover what they believe to be their own personal weaknesses and flaws.  It’s an intriguing concept, and one I wish had been explored more thoroughly.

Providing the only other interesting twist to the endless barrage of commotion is the fact that the soundtrack is (for some reason) chock full of 1980s classics – everything from Van Halen’s “Jump” to Twisted Sister’s “We’re Not Gonna Take It” – and the script is chock full of references to many of the pop-culture motion pictures of the era – everything from “Fast Times at Ridgemont High” to “The Breakfast Club.”  Some famous scenes are acted out, as when Artemis (Samantha’s OASIS existence) frightens Parzival (Wade) with the stomach-bursting appearance of the alien from Ridley Scott’s “Alien.”

An extended sequence paying tribute to Stanley Kubrick’s “The Shining” is a lot of fun for baby boomers, but is likely to mean nothing to millennials.  And haven’t we had enough parodies of the “Stayin’ Alive” dance scene from “Saturday Night Fever?”  If Parzival and Artemis were to meet in an OASIS dance club, couldn’t Penn and Cline have given us something from “Flashdance” or “Footloose” instead?

The cultural references work on the same level as the inclusion of Bugs Bunny and Mickey Mouse in Robert Zemeckis’ 1988 classic “Who Framed Roger Rabbit?”  But unlike in that superior film, the “Alien” and “The Shining” (and heck, even the “Saturday Night Fever”) scenes made me wish I were re-watching those pictures instead of this one.

Good premise hidden in all the noise

“Ready Player One” reeks of big-budget overkill, and that’s unfortunate.  There’s a good premise in here somewhere.  If only Spielberg could have slowed down the warp-speed and written in more tender and meaningful moments, “Ready Player One” could act as a social commentary on the lack of personal connection in our society.  This conclusion is broached at the very end, but by then our senses are too numb to notice.  Or care.