Itzhak Perlman will perform in concert Saturday, April 28, at 8 p.m. at The Palladium. 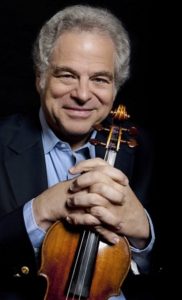 Israeli-American violinist and conductor Itzhak Perlman has been making waves since his 1958 appearance on The Ed Sullivan Show at age 13, and he remains one of the great ambassadors and popularizers of classical music. His recordings have claimed 15 Grammy® Awards, as well as the Grammy Lifetime Achievement Award, and his PBS specials have won four Emmy Awards. Other career highlights have included performing for several presidents and receiving the Presidential Medal of Freedom in 2015.

Tickets available online at http://www.thecenterfortheperformingarts.org/ or by phone at (317) 843-3800