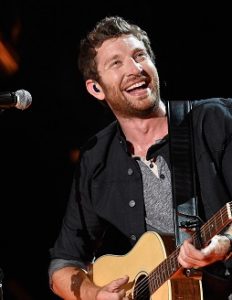 Platinum-selling singer/songwriter Brett Eldredge recently released his brand new single “The Long Way” from his self-titled record, which was the best-selling album (all-genre) upon release and hit No. 1 on the Billboard Country Albums Chart and the Top Album Sales Chart. “The Long Way,” which he performed on both TODAY and The Tonight Show Starring Jimmy Fallon in August, follows Eldredge’s six chart-topping singles including his most recent, “Wanna Be That Song.” His sophomore album Illinois debuted at No. 1 on the Billboard Country Albums Chart and No. 3 on the Billboard Top 200 Chart upon its release, and it features the Platinum-certified mega hit “Drunk On Your Love” and Gold-certified “Lose My Mind.” The Paris, IL native also released his Christmas album Glow in October of last year, which earned him No. 1 song on the Holiday Music and Adult Contemporary charts with “Baby It’s Cold Outside,” a duet with Grammy-winner Meghan Trainor. Eldredge’s 2013 debut album Bring You Back spawned three chart-topping singles including the Platinum-certified “Don’t Ya,” the Gold-certified “Beat of the Music,” which was the most played country song of 2014, and the Gold-certified “Mean To Me.”