Lily and Amanda used to be friends.  But since Amanda’s father died just before their freshman year in high school, they’ve grown apart, Lily now attending a boarding school and Amanda struggling though public school.  The two meet up just prior to senior year when Amanda’s mother pays Lily to act as an English class tutor.  The two rekindle their friendship, although it now exists on a deeper level. 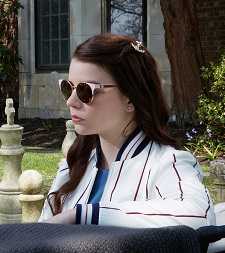 You see, Amanda now harbors no feelings.  Having recently euthanized her beloved, yet old and frail, horse, Amanda is now devoid of sensation.  Nothing surprises her; nothing phases her; nothing moves her.  Lily, on the other hand, is living a high-class hell – albeit a hell of her own making.  Her mother has remarried a demanding and pretentious louse who fronts the funding for Lily to attend a different boarding school in a far-off city during her senior year.  Lily would (perhaps wistfully, though not necessarily realistically) like to see him dead.

Amanda to the rescue.  As she maintains no emotional awareness, she’d be the perfect executioner – or “victim,” if you will.  I’ve read that first-time director Cory Finley’s “Thoroughbreds” is Hitchockian in nature.  I’ll agree with that.  But Finley’s choppy, stilted dialogue is straight out of David Mamet’s playbook.  As Amanda and Lily converse and reacquaint in the early scenes, every word or phrase might mean something – as might every moment of silence.  Much as in music, each rest carries as much relevance as each note. 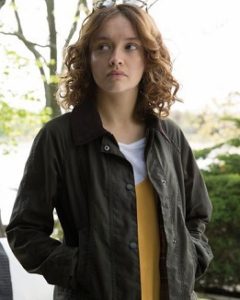 “Thoroughbreds” is nothing short of the first great film for adults in 2018 (read: having nothing to do with supernatural powers).  As Lily, Anya Taylor-Joy is vulnerable yet cunning.  As Amanda, Olivia Cooke is mechanical yet observant.  She’s “Juno” to the n’th degree – too smart for her own good, but in need of direction and structure.  She finds this guidance from Lily, who requires a means to an end.  If one is the ying, the other is the yang.

Better than “Get Out”

To expound upon the plot details would do a great disservice to the intricate screenplay Finley has offered up.  Suffice to say that Finley takes us in a direction in which we fear his script might proceed, but (unlike in Jordan Peele’s “Get Out”) then he retreats, tempering the sharper edges of his intricate plot with a dose of realism sadly absent in most films.  “Thoroughbreds” is a joy to behold, although viewers will not fall in love with any of the characters.

As local drug dealer Tim, the late Anton Yelchin turns in his finest performance as a young entrepreneur bristling with ambition but absent any degree of superintendence.  When the girls blackmail him in a murder-for-hire, he retains the upper hand by performing only half the task.

Lose yourself in plot

When the credits roll, the girls’ fates are sealed as much by societal preconceptions as by plot conveniences.  There’s a lot going on in “Thoroughbreds,” and it’s an absolute joy to partake in its dark and eerie ambiance.  As usual, I’ve tried to mentally compare it to something else with which we can identify; yet I’ve come up blank.  Instead I’ve discovered its antithesis.

Yorgos Lanthimos’ 2017 thriller “The Killing of a Sacred Deer” was an overrated psychological thriller which used convoluted plot points and structural immaturity to put forth a dark, seething entrée of celluloid overkill that offended more than it achieved its cinematic goals.  “Thoroughbreds” will be comparatively underseen, but is far more deserving of accolades.  Unfortunately, its March release verifies that Focus Features has no conviction of its success.  And that’s a damn shame.

While I will not label “Thoroughbreds” a masterpiece, it ranks among the best directorial debuts of recent years.

And he serves as the radio film critic for http://indyboomer.com/radio/