Meagan Johnson, IWC’s Artistic Director, is excited to tell you… 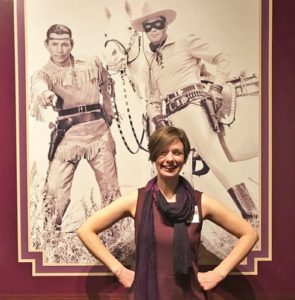 …that it has to do with IWC’s spring concert, Who We Are: She. In this second concert of our 2017-2018 season, we will sing the stories of women who were pioneers and trailblazers, and bettered the world for us all. The concert will be presented in conjunction with the Eiteljorg Museum’s “Reel West” exhibit, exploring morality, diversity, and identity as depicted in the Western film genre.

And as for the special connection to that certain masked character of the American West… Meagan is excited to tell you this concert will include the song Time’s Up!, a new piece with original lyrics written by our very own Sherri DuBois and arranged by Assistant Director, Tyler Secor. The song is set to music from the William Tell Overture, which happens to be the theme of “The Lone Ranger!”

Join us for our spring concert, sure to be a unique experience!

Who We Are: She
Saturday April 14, 7:30 PM & Sunday April 15, 3 PM
Eiteljorg Museum of American Indians and Western Art