The Theory of Everything

I’ve read that some biblical scholars don’t consider the New Testament to be a series of books about Jesus, but rather a series of books about Paul.  Sure, the four gospels take us through the life of Jesus, but the remaining books either document Paul’s ministry following Jesus’ death, or they are Paul’s epistles.  These scholars have a point.  While Jesus is the central figure, his acts and his teachings are seen through the recently-converted eyes of his greatest disciple. 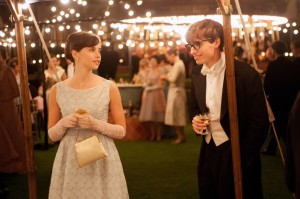 The same could be said for James Marsh’s new film biography of physicist Stephen Hawking, The Theory of Everything.  Yes, Hawking is the central figure, but the story is told through the eyes of his wife, Jane Hawking.  At first, I was bothered by the fact that Hawking’s wife was given so much prominence in a film that should have dealt more with Hawking’s scientific theories.  But about halfway through, it dawned on me that this is not so much Hawking’s story as it is that of his wife.

Now, why would Marsh choose this approach?  First, the film is based on Jane Hawking’s memoir, so it’s automatically as much her story as it is his.  But I believe Hawking is a difficult character to ask the masses to relate to.  His brilliance exceeds the mental capacities of most viewers so much that another character must be used as a conduit to bring Hawking within our mental grasp, if you will.

Try to imagine a motion picture about Albert Einstein.  A filmmaker could spend two hours attempting to explain the theory of relativity to the masses – a difficult, and not particularly interesting approach – or he could spend two hours disseminating Einstein’s genius through the lens of another – a spouse, childhood friend, or professional colleague.  Remember Milos Forman’s Amadeus?  A film biography about Mozart would have been fine, but it was Oscar-worthy when told through the jealous eyes of his less-talented rival Salieri.  And the New Testament would have been fine had it stopped after the fourth gospel.  But it only becomes tangible when filtered through the first great promulgator of his teachings.

In The Theory of Everything, young British actor Eddie Redmayne plays Hawking, and perfectly captures his genius, which becomes more focused as the years progress.  At the same time, of course, Hawking’s ability to communicate diminishes due to his motor neuron disease.  Some critics have complained that Redmayne’s performance isn’t as strong as that of Daniel Day-Lewis’s portrayal of artist Christy Brown, who suffered from cerebral palsy.  I say Redmayne has, in a way, a more difficult task than Day-Lewis, because Hawking simply doesn’t possess the fiery personality of Brown.  Hawking is a fairly easygoing guy – especially considering his physical condition – and Redmayne does an excellent job of showing us his sly sense of humor, even without a voice.  It’s a great piece of acting, which is deserving of a Best Actor nomination.

Meanwhile, it would be a crime if the academy does not also nominate Felicity Jones as Best Actress, in what I consider to be the best performance anyone’s given in any film so far this year.  Jones perfectly captures Jane Hawking’s tender and supporting love for her husband, coupled with the inner strength she summons to live her own life.  She is, at once, the gatekeeper of her husband’s growing legacy, the strength he requires to lead as “normal” a life as possible, and a woman determined to carve her own niche in this world.  The understated nuances of Jones’ acting are a joy to watch.

While The Theory of Everything suffers somewhat by never even making an attempt to explain Hawkings’ teachings, that fault diminishes as the film progresses.  Jane’s independence and Stephen’s stubbornness eventually lead to a split in their relationship and, eventually, their marriage.  This turns out to be the most interesting section of the film, because their love and respect for each other never wavers, even as their lives begin to take on different trajectories.

“The Theory of Everything” is more a love story than it is a story about science.  Don’t expect to learn about what’s inside Hawking’s brain, but rather how it relates to those around him.  Do expect to see a fascinating story about a modern-day genius and the independent woman who always has his back.