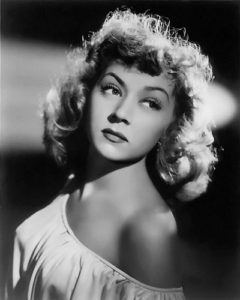 In 1980, veteran actress Gloria Grahame was diagnosed with breast cancer – which had been in remission since undergoing radiation treatment six years earlier.  This time, Grahame refused medical treatment so she could continue working in live theatre.  While performing in London a year later, she took ill but refused hospitalization – instead requesting to be taken to the childhood home of former lover Peter Turner.  Turner’s own memoir about this final chapter in Grahame’s life is the basis for Scottish director Paul McGuigan’s latest picture, “Film Stars Don’t Die in Liverpool.”

Now Gloria Grahame was no Christian Scientist.  She simply refused medical treatment, instead relying on surrounding herself with loved ones and her own sunny outlook to carry her through what she had to have known would be her final days.  Grahame had family in California, but was not particularly close to them, as McGuigan and screenwriter Matt Greenhalgh show us in a particularly poignant scene.  But she was close to Turner and his mother.  Ironically, Turner’s mother (played by Julie Walters) was able to provide more of the motherly instinct Grahame required than her own mother, a notably flighty Vanessa Redgrave. 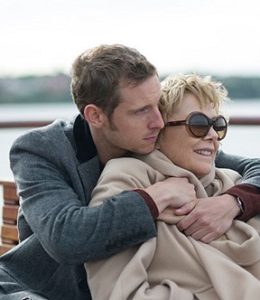 As the great Hollywood actress, Annette Bening shines in her best performance in years.  Bening brings all the breathy, lighthearted personality we expect, and couples it with sudden mood swings that confound those around her.  This volatile capriciousness exemplifies the fact that she’s had four husbands – a factoid she repeats ad infinitum to Turner.  As the young Liverpudlian, British actor Jamie Bell turns in his best since his debut role in “Billy Elliott” back in 2000.  Bell infuses Turner with a certain amount of wide-eyed schoolboy admiration, although he’s too young to fully appreciate Grahame’s stardom – a fact she admires.  To her, he’s a blank slate, with no knowledge of her checkered past – including marrying and having a family with the stepson of one of her previous husbands, a scandal which effectively blackballed her career for most of the 1960s.

The two meet cute in a 1979 flashback.  They’re each working in local theatre in London, renting adjoining apartments, when she asks his help working on disco dancing for an upcoming production.  The physical closeness of the dancing instruction soon leads to an affair – one with no pretenses about long-term structure or direction of any kind.  This is a relationship of convenience – of discovery for him, of lost and squandered youth for the former Hollywood star.

The 1979 scenes provide a refreshing contrast to the darker finality of those set in 1981.  Bening is youthful and carefree in the earlier scenes; scarred and traumatized in the latter.  Her facial lines seem to represent the harsh, rough edges of her life.  The cancer now encompasses her physical body, in contrast to the now rarely seen glimpses of the sunny personality that once glowed through her exterior.  Bening is marvelous, and probably should have received an Oscar nomination – although this is a very competitive year in the Lead Actress category.

Bell does an excellent job of portraying Peter’s love for Grahame as an individual, as opposed to that of a fawning star-crossed fan.  Their relationship is admittedly unconventional, while simultaneously feeling like exactly what the two of them needed at the time.  Often we see May-December romances (on screen and in life) as ridiculous and self-serving; this one feels downright necessary.  And Julie Walters does an excellent job of caring for the actress without passing judgement on her or her son.

I like a lot about “Film Stars Don’t Die in Liverpool,” but one thing I don’t like is its lack of necessity.  While “Mommy Dearest” and “Frances” told fascinating stories about the private lives of unstable actresses, “Film Stars” feels like we’re simply dropping in on an affair (and subsequent illness) in the life of a former Hollywood legend.  There’s nothing in Greenhalgh’s screenplay to give the impression of importance.  Consequently, we’re sufficiently entertained, but we’re left feeling empty on an intellectual level.  What does all this mean?  Why should we care?

These are questions I can’t answer, so I must leave you with my own confusion as to the necessity of bringing “Film Stars Don’t Die in Liverpool” to the big screen in the first place.  Again, it’s a tour-de-force for Annette Bening.  Unfortunately, it’s little more.

and he serves as a radio film critic for http://indyboomer.com/radio/