Join us for An Evening With Noel Gallagher’s High Flying Birds on Sunday February 25th at 8:00pm at The Murat Theatre at Old National Centre. 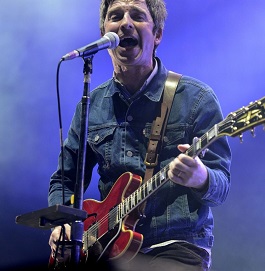 Having left Oasis the previous year after a typically turbulent, backstage row with brother Liam at Manchester’s Heaton Park, the eldest Gallagher sibling’s first official foray into a “solo” career took off in 2010 with Noel Gallagher’s High Flying Birds, featuring the talents of Gallagher, former Oasis keyboard player Mike Rowe, Lemon Trees drummer Jeremy Stacey, and percussionist Lenny Castro. Cut from the same arena-sized, melodic Brit-pop cloth as the band he helped bring to prominence in the early ‘90s, the High Flying Birds released their debut single, “If I Had a Gun,” in August 2011, followed by an eponymous, full-length debut in mid-October. It reached No. 1 in the U.K., also performing well across the globe. In 2014, the single “In the Heat of the Moment” preceded the release of the High Flying Birds’ second album, Chasing Yesterday.