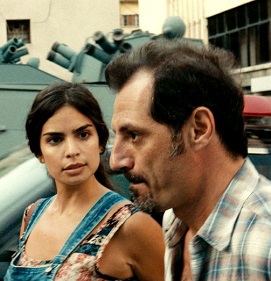 Tony Hanna is a Lebanese Christian living in downtown Beirut.  His wife Shirine is pregnant with their first child.  His life is basically good – until one afternoon when a construction crew asks to repair a gutter drain pipe protruding from the porch of Tony’s condo.  Even though the pipe is not up to code, Tony refuses to allow the work.  The crew foreman overrules Tony’s decision and the drain pipe is replaced.  Tony then destroys their handiwork with a sledgehammer, prompting crewmember Yasser Salameh to insult Tony using language I am unable to print here.

This is the premise for Ziad Doueiri’s “The Insult,” nominated for Best Foreign Language Film at this year’s Oscars.  While I haven’t seen all the nominations, I can’t imagine a more deserving winner than “The Insult.”  What ensues following the initial dispute is a gripping post-Lebanese Civil War drama highlighting the ethnic and racial tension still prevalent in one of the most diverse countries in the Middle East.

You see, Yasser (Kamel El Basha) is a Palestinian living and working in Beirut, and his insult carries more weight (or baggage, if you will) than had Tony (Adel Karam) been insulted by someone of any other background.  We learn early in Doueiri’s and Joelle Touma’s screenplay that Palestinians are held in as low regard by present-day Lebanese as Samaritans were in Biblical times.  Tony demands an apology, but Yasser struggles with what a potential confrontation could mean.

Finally Yasser visits Tony’s auto repair shop and attempts an apology, but Tony (who likes to watch the Lebanese Christian version of Rush Limbaugh while working) uses the opportunity to insult all Palestinians, resulting in a physical assault.  The two men end up in a Beirut version of small claims court, but during the trial neither man can bring himself to repeat the words which led to the physical confrontation.

You see Tony is a hothead whose vocabulary doesn’t include the word “compromise,” but these two men are essentially well-meaning and good-hearted, if not rightfully stubborn given the uncomfortable history of their ethnic backgrounds.  Neither Tony nor Yasser wants to cause trouble.  Tony simply wants an apology, and Yasser wants to complete his construction work.  But their initially minor scrap goes viral, in a Middle Eastern sort of way. 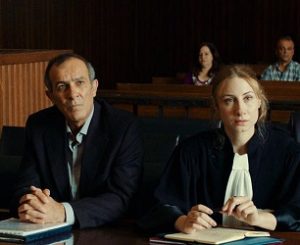 Once the two men hire attorneys (the excellent Camille Salameh and Diamand Bou Abboud) and garner media attention, Beirut seems torn between factions with deep-seated distrust of one another.  Suddenly, the original insult seems trivial, as the attorneys argue how the 1976 slaughter of Lebanese citizens by Palestinians insurgents could have (perhaps subconsciously) affected the hatred Yasser and Tony harbor toward one another.

Thing is, Yasser and Tony don’t really hate each other.  In my favorite scene, Tony even performs a minor repair to Yasser’s car.  For free.  Without having been asked.  “The Insult” is a powerful dramatization of modern-day tension in the Arab world.

Aside from the acting and superb screenplay, I loved the fact that viewers need not possess an inherent knowledge of Arab history to enjoy “The Insult.”  And I love the fact that the tension does not involve Israelis.  This is not a film about Jewish/Palestinian relations at all.  Its message (or warning) is not necessarily political in nature.  This is about ethnic groups with a strained history.

While perhaps unintentional, “The Insult” serves as a warning to the rest of the world – in particular the great melting pot known as the United States.  If we can’t get along with those of other backgrounds, the human race faces a dim future.  During WWII, Japan and the U.S. were archenemies.  73 years after the atomic bombs ended that war, many of us have Japanese-American friends and neighbors.  “The Insult” hopes for such a resolution amongst those of various Arab ethnicities.  American viewers can only hope for such an outcome with our own immigrants.  Let this masterful film serve as a good place to start a meaningful discussion.

and he can be heard on the radio at http://indyboomer.com/radio/