Clint Eastwood likes to make movies about American heroes – particularly those thrown into think-fast crises in which they did not expect to find themselves.  A couple years ago he made “Sully,” a retelling of the short voyage of US Airways Flight 1549 and its captain, Chelsey “Sully” Sullenberger, who successfully landed the plane in the Hudson River without killing any passengers.

Now he’s churned out “15:17 to Paris,” about the three young American men who triumphantly subdued a well-armed terrorist aboard a train from Amsterdam to Paris.  As with “Sully,” the actual encounter last but a few harrowing minutes.  Unlike “Sully,” this time Eastwood fails to flesh out the Dorothy Blyskal screenplay with enough filler material to hold our interest.  The result is one of Eastwood’s worst films – a real missed opportunity to tell a wonderful story.

Recall that the forced landing of Flight 1549 occurred about midway through Eastwood’s “Sully,” and that the long denouement took us through the trial in which the National Transportation Safety Board accused Sully and his assistant of landing the plane in a river when computer simulations showed they could have made it back to LaGuardia Airport.  The inclusion of the trial padded the screenplay enough to hold our interest for 96 minutes.  By contrast, “15:17 to Paris” seems long and boring even at a crisp 94 minutes.

In “15:17 to Paris,” all the filler material (i.e. anything that does not take place on the fateful train ride) occurs before the incident.  We’re treated to a review of the boys’ young lives.  They were all classmates and friends, and they each had a propensity to land in the principal’s office for one rule violation or another.  And they enjoyed playing war – not just killing the enemy, but saving the helpless. 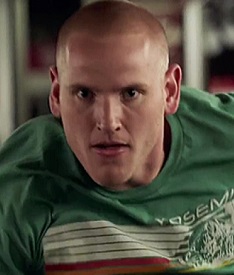 As young men, Spencer Stone (the protagonist – or at least the character whose backstory Eastwood fills in most thoroughly) joins the Air Force, and Alek Skarlatos the National Guard, while Anthony Sadler stays home in Sacramento.  During a furlough from his Air Force duties, Stone and Sadler decide to tour Europe together.  At the same time, Skarlatos is already in Germany visiting a former exchange student previously hosted by his family.  The three friends meet up, travel to Amsterdam, and then to Paris.

Rather than skimming over the events leading up to the fateful ride, Eastwood and Blyskal give us a full travelogue of the European vacation – complete with the tourist sites of Rome and Venice, and the men’s friendship with a young female traveler.  While this extended sequence shows that Stone and Sadler are perfect gentlemen around the fairer sex, it does nothing to advance the story.  We know what’s coming, so let’s get on with it!  After all, how many selfie-stick photos of the men standing in front of various landmarks do we need to see to know they had a good time?

When the calamitous ride finally occurs, the result is underwhelming.  Not that the action isn’t chilling and distressing, but “15:17 to Paris” doesn’t show us anything we didn’t already know (or at least deduced) from news reports.  The film concludes with Stone, Skarlatos, and Sadler receiving the French Legion of Honour in Paris – with supportive and encouraging friends and family members present.  It’s a feel-good ending to a story of great courage, but it simply leaves us empty.

What happened after the protagonists return to America?  How did they handle the sudden fame?  We know Sully Sullenberger wrestled with his new “hero” label.  How about Stone, Skarlatos, and Sadler?  And what about Ayoub El-Khazzani, the terrorist?  What was his motivation?  Was he with ISIS?  Al-Quaeda?  What made him tick?  By concentrating solely on the heroes, Eastwood deprives us of learning the rest of the story.

On a side note, a lot has been made of Eastwood’s decision to cast Stone, Skarlatos, and Sadler as themselves.  While casting real people as themselves is rare, it’s not unheard of.  Personally I found it made no difference here.  The three young men (particularly Stone) are charismatic enough to actually have acting careers.  And they do a fine job here.  But they can’t save a weak script any better than could seasoned actors.

We can all agree that Stone, Sadler, and Skarlotos are heroes – worthy of parades and presidential medals.  But that doesn’t necessarily make “15:17 to Paris” a great film.  And that’s too bad.  They deserve as good as Sully Sullenberger.