The Printing Partners Classical Series presents the China National Symphony Orchestra with Conductor Tan Dun in concert at the Palladium on Friday, Feb. 9, at 8 p.m.  Tickets from $35.

About the China National Symphony 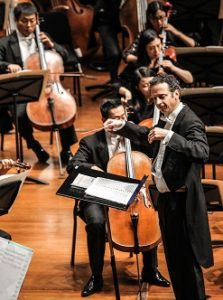 For half a century, the China National Symphony Orchestra has introduced Chinese audiences to a vast repertoire of classical, romantic, modern, and contemporary orchestral works by both Western and Asian composers. The current touring production is a Chinese New Year celebration that includes works by Stravinsky and the orchestra’s own artistic director and conductor, Tan Dun, best known for scoring the films Hero and Crouching Tiger, Hidden Dragon and composing music for the medal ceremonies at the 2008 Beijing Olympics.