A mother. A daughter. Three possible dads. A trip down the aisle no one will soon
forget! It all adds up to one feel-good Broadway hit: Mamma Mia!, the first musical and headliner of
Beef & Boards Dinner Theatre’s 45th Anniversary Season, is now on stage through April 8. 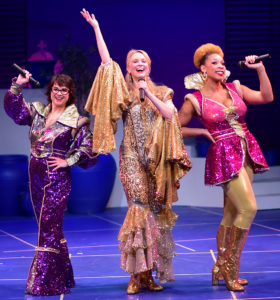 Featuring the popular music of the Swedish super-group ABBA, Mamma Mia! is set on a Greek island
where Sophie is planning to marry Sky, and wants to invite her father to the wedding. There’s one slight
snag – she doesn’t know who he is. But after discovering an old journal belonging to her mother, Donna,
she learns her father is one of three possible men: Sam Carmichael, Bill Austin, or Harry Bright. So
Sophie decides to invite all three – unbeknownst to her mother and her fiancé. What could go wrong?
More than 20 toe-tapping ABBA hits include “Dancing Queen,” “Take A Chance on Me,” “Honey,
Honey,” and the title tune: “Mamma Mia.”

Mamma Mia! welcomes several newcomers to the Beef & Boards stage. They include Amy Bodnar,
who starred on Broadway as Laurey Williams in the Trevor Nunn/ Susan Stroman production of
Oklahoma!, as Donna. Also making their Beef & Boards debuts are Rachelle Rose Clark as Sophie, and
Mark Epperson as Sam Carmichael, Will Leonard as Sky, and Jalynn Steele as Tanya. Jeff Stockberger
and Don Farrell play Bill Austin and Harry Bright, respectively. Lanene Charters, who played Dorothy
in Beef & Boards’ 1999 production of The Wizard of Oz, returns for Mamma Mia! as Rosie.
Nominated for seven Tony Awards, including Best Musical, Mamma Mia! also was a 2008 box office
favorite film, starring Meryl Streep as Donna, Amanda Seyfried as Sophie, Pierce Brosnan as Sam,
Colin Firth as Harry, and Stellan Skaarsgard as Bill. They will all return in a sequel, “Mamma Mia! Here
We Go Again,” set to hit theatres in July of 2018.

Mamma Mia! is on stage for 66 performances in the intimate atmosphere of Beef & Boards Dinner
Theatre. Tickets range from $44 to $69, and include Chef Odell Ward’s dinner buffet, fruit & salad bar,
unlimited coffee, tea, and lemonade. For reservations, call the box office at 317.872.9664 anytime
between 10 a.m. and 7 p.m. Tuesday through Sunday and from 10 a.m. to 5 p.m. Mondays. For complete
show schedule, visit beefandboards.com.
Mamma Mia! is sponsored in part by Current Publishing, and rated PG-13 for occasional adult language.