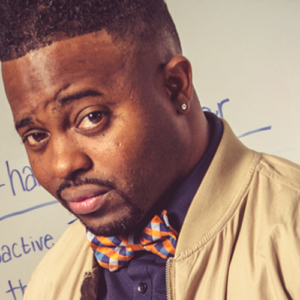 Eddie B is comedy on steroids! The “Teachers Only Tour” has established Eddie as the official voice of teachers across the globe. Educators from America to Africa, Dallas to Dubai, New York to New Delhi (and beyond) are getting a lesson in the funniest ways to express their worst frustrations and they are loving every second of Eddie B’s uncensored, raw, and hysterically realistic portrayal of a teacher’s hectic life, from the point of view of an actual teacher!

Comedy for teachers by a teacher

The phenomenon, which began with a series of videos entitled “What Teachers Really Say” (written and starring Eddie B) has tapped into a niche only this multi-faceted comic/teacher can comprehend. Through a rigorous comedic set characterized by original material and accented by physical comedy, Eddie B says what teachers everywhere are thinking but couldn’t quite say out loud, until now. He is now the official “voice of teachers” and is currently in talks to parlay the mega success of his tour into a book deal as well as television and big screen versions of his wildly popular viral videos. Millions of educators on social media are calling the “Teacher’s Only Tour” their very own stress reliever and they are filling their favorite venues to capacity eager to hear Eddie B speak THEIR mind!

The Houston native exploded on the scene in the last decade breaking the rules and intent on changing the game. While others waited in the wings for a shot at becoming a top stand-up comic, Eddie created his own opportunity with a solo two-hour comedy performance. He played to a packed house at his beloved TEXAS A&M University-Kingsville, where he discovered his disarming knack for physical comedy and began developing the raw, edgy humor that’s become his trademark. He’s been on a fast track ever since.

Local appearance at the Murat

Tickets: Tickets are on sale now and available at Ticketmaster.com, OldNationalCentre.com, the Old National Centre Box Office, or charge by phone at 800-745-3000.