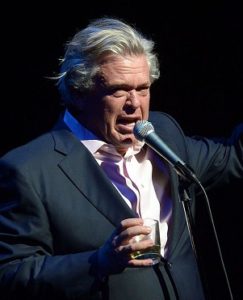 Comedian Ron “Tater Salad” White is best known as the cigar smoking, scotch drinking funnyman from the “Blue Collar Comedy” phenomenon. But with two Grammy nominations, a Gold Record, three of the top rated one-hour TV specials in Comedy Central history, a book that appeared on the New York Times Best Seller List, and CD and DVD sales of over 10 million units, White has established himself as a star in his own right. His first solo comedy CD, Drunk In Public, was released in November 2003, showcasing the insightful and hilarious White, who manages to be both razor-sharp and blunt. Also that year, his first one-hour comedy special, “They Call Me Tater Salad” earned Comedy Central the highest rated Sunday in its history. The DVD/CD has sold over 2.5 million copies to date and has been certified multi-platinum. White’s second one-hour special, “You Can’t Fix Stupid” was filmed in January 2006 at the Majestic Theater in Dallas, Texas. The special aired on Comedy Central to 4.5 million viewers to make it the third largest audience in Comedy Central’s history and the No. 1 show in prime time and on basic cable.