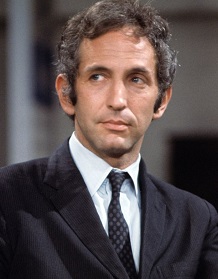 In 1971, the New York Times broke one of the most important stories in history when it made public certain parts of the “Pentagon Papers.”  Working at the behest of former Defense Secretary Robert McNamara, military analyst Daniel Ellsberg compiled a top-secret study of American involvement in Viet Nam dating all the way back to the Truman administration.  The papers (thousands of pages worth) were meant to be kept secret, but Ellsberg felt a calling to expose the government cover-up of secret military involvement in a country halfway around the world.  Steven Spielberg’s new film “The Post” revisits this chapter – but from the viewpoint of the Washington Post.

What many won’t remember (or never knew) was that the Post hasn’t always rivaled the Times as “America’s newspaper.”  Prior to the Pentagon Papers, the Post was considered a small, local, family-owned paper – certainly not on the same far-reaching national scope as the Times.  At the time of the Pentagon Papers, the Post was owned by the Graham family, and Katherine Graham served as its publisher.  She had taken over upon the untimely death of her husband in 1959.  Many assumed her reign would be temporary, until a new publisher could be named.  Instead she remained head of the Post for more than two decades, steering the Washington daily to national prominence during the Watergate investigation of young writers Woodward and Bernstein, chronicled in Alan J. Pakula’s “All the President’s Men” in 1976.

All the President’s Men

“The Post” takes place just prior to the Watergate break-in.  At this point, neither Bob Woodward or Carl Bernstein works for the Post.  Ben Bradlee is its vigorous editor, always on the hunt for the next big story.  If that name sounds familiar, Bradlee was played by Jason Robards in the Pakula film.  Tom Hanks takes over the role for Spielberg. 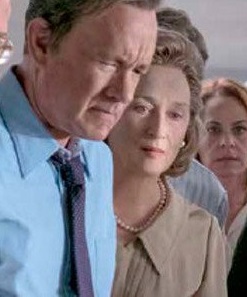 Having not witnessed a story from top Times reporter Neil Sheehan in weeks, Bradlee assumes he’s on the verge of breaking a big story.  Bradlee even pays an intern to spy on the Times’ Washington office.  Bradlee is aghast when the Times publishes several volumes of the Pentagon Papers in summer of ’71, until his top investigative reporter Ben Bagdikian tracks down Ellsberg in a seedy motel, only to be given additional volumes of information he had not shared with the Times.

Eager to publish, Bradlee invites his entire staff of writers to his house to organize hundreds of randomly sorted (and unnumbered) pages and to begin writing – in hopes of publishing something in the next morning’s edition.  This particular scene says more about the glory years of investigative reporting than any other in “The Post.”  As Bradlee’s wife (Sarah Paulson) provides sandwiches and drinks, the writing staff (all men save for a young Meg Greenfield) practically crackles with excitement amid a sea of cigarette smoke and manual typewriters.

The only damper to Bradlee’s enthusiasm is the fact that the Nixon administration has obtained a federal court order prohibiting the Times from publishing any more of the Pentagon Papers (after the first three days), citing the Espionage Act of 1917 because they had no authority to publish classified documents.  Ironically, this was the very same act the Obama administration used against whistleblower Edward Snowden when he leaked classified documents exposing the use of illegal torture methods employed against suspected terrorists by U.S. military at the command of the George W. Bush White House.

Bradlee argues that the court order applies only to the New York Times and not to other publications.  Graham contends such a disclosure would permanently cut off the access previous administrations had granted journalists to their personal lives.  As she stares at a photo of herself with the Kennedys (while hosting a party whose guests include McNamara), Graham struggles with losing this entry point to the movers and shakers of America – while at the same time knowing the Constitutionally guaranteed free press must be allowed to operate outside government control.  It’s a tough decision, and one which must be made prior to the midnight deadline for publication the next morning.  Who better to portray such angst than Meryl Streep?  And lest you had any doubt, our most celebrated actress turns in yet another performance so determined and so convincing that she might very well add to her record 20 Oscar nominations. 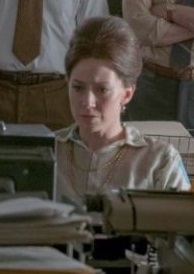 The supporting cast is also strong, particularly Bob Odenkirk as Bagdikian, the veteran journalist whose eagerness to land the next “big story” is never dampened, and Carrie Coon as Greenfield, the young reporter so smart and tireless as to be accepted as an equal by an old-boys’ newsroom full of chain-smoking veteran hacks.

“The Post” instantly ranks as one of this year’s best films.  As for Spielberg, I believe it is superior to his last effort, 2015’s “Bridge of Spies,” also starring Hanks.  But “The Post” has several strikes against it, none of which is Spielberg’s fault.  First, it comes two years after “Spotlight,” an even more interesting and faster-paced motion picture embracement of the dying art of investigative journalism.  Since that film won the Oscar for Best Picture, it’s highly unlikely “The Post” will too.

Second, Spielberg has the disadvantage of releasing his picture a year after Oliver Stone’s “Snowden,” which set a high bar for films with whistleblower themes.  I’m not saying “Snowden” is a superior picture to “The Post.”  In fact, in many ways it is not.  But it was first.  And that counts for something.

And finally, lest you question Hollywood’s recent outpouring of pictures incriminating the Nixon administration (“The Post,” “Mark Felt: The Man Who Brought Down the White House”), consider the current resident of 1600 Pennsylvania Ave.  Perhaps Hollywood is merely sounding a warning bell.  This is as good a time as any to revisit the First Amendment, particularly as it applies to freedom of the press.  Presidents who add journalists’ names to their enemy lists or ban certain networks from press briefings do our country a vast disservice.

Works as a companion piece

“The Post” succeeds in its effort to crystallize the importance of a free press while espousing the dying art of investigative reporting.  Several scenes of protesters supporting free speech stand as a stark contrast to today’s lackadaisical electorate.  I suppose the greatest compliment I could bestow upon “The Post” is that it would work well as a companion piece to “All the President’s Men.”  Watch “The Post” first (which actually concludes with the Watergate break-in), and then segue into the older film.