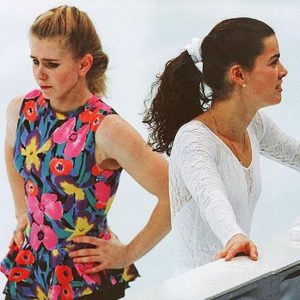 At the 1994 U.S. Figure Skating Championship in Detroit, a man took a crowbar and attempted to break the leg of skater Nancy Kerrigan so she would be unable to compete in the 1994 Winter Olympics.  Turns out the man was “hired” by skating rival Tonya Harding, who subsequently received a lifetime ban from sanctioned skating events.  It was a particularly sad installment in U.S. sports history. 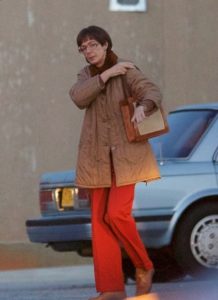 For some reason, Australian director Craig Gillespie has found it necessary to revisit this disheartening episode in his new biographical film “I, Tonya.”  Although she doesn’t look much like Harding, Margot Robbie plays the roughneck skater.  Sebastian Stan is her on-again/off-again boyfriend/husband Jeff Gilooly.  And Allison Janney shines as Harding’s rude, boorish, and thoroughly disparaging mother – a woman so disgusted with her own life she constantly berates her daughter in attempt to push her to be the best skater she can possibly be.

Because of, or perhaps in spite of, her mother, Harding overcomes all odds to become the first woman to perform a triple axel at the 1991 U.S. Championships.  Robbie’s look of absolute joy in this scene is downright triumphant.  We find ourselves rooting for Harding, even though we’re aware of the tragedy and heartache to come.  The triple axel scene is the one highlight in the career of a tragic figure; it is also the one highlight in “I, Tonya.”

So what’s wrong with Gillespie’s account of Harding’s life?  One of my biggest complaints is I don’t like the structure of the film.  Steven Rogers’ screenplay begins with Robbie as Harding, Stan as Gilooly, and other actors (in character) speaking directly to the camera as though they are being interviewed by some unseen reporter.  This sets the stage for the rest of the film, but Gillespie keeps coming back to the interview format – over and over again throughout the entire picture – as if to tell us what the characters are thinking.  As a viewer, am I not intelligent enough to figure this out for myself?  Have you no faith in your own screenplay?

I also didn’t like the apologetic tone of “I, Tonya.”  By the end of the film, everyone in Harding’s life has been saddled with a certain amount of blame – except for Harding herself.  She’s the Hillary Clinton of “I, Tonya.”  The trajectory of her career is attributed to outside sources, but not to the one person who could have changed the path of her own life.

But my biggest criticisms are beyond Gillespie’s control.  First, I don’t think I learned anything from this picture that I didn’t previously know or suspect.  I suppose I was unaware Harding’s mother was an abusive, white trash, chainsmoking monster.  But it certainly doesn’t surprise me.  Or that Gilooly was a violent, abusive hothead.  Didn’t know it, but certainly suspected it.  Or that the thugs Gilooly employed to “get inside Kerrigan’s head” would be dumb enough to physically attack her.  I assumed they were dim-witted hooligans.  And “I, Tonya” merely reinforced my notions.

Which leads me to the most colossal quandary I have with “I, Tonya.”  And that is that I simply have no desire to revisit such an abhorrent and deplorable chapter in sports history.  Why is Tonya Harding someone I should care about almost a quarter century after she practically destroyed figure skating?  Unfortunately, “I, Tonya” doesn’t answer this burning question – making the entire effort pointless.