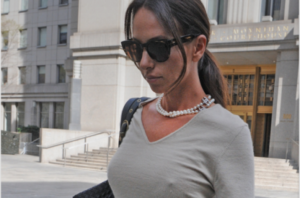 Unlike Tonya Harding’s story, unfortunately revisited in the recent “I, Tonya,” almost no one has a recollection of Molly Bloom.  Outside of, “Hmmm, that name sounds familiar,” most of us draw a blank.  That’s what makes screenwriter Aaron Sorkin’s directorial debut “Molly’s Game” so fascinating.  He could have simply made up this plot.  But the fact that he didn’t grabs onto our curiosity and doesn’t let it go for almost two-and-a-half hours.

Sorkin enjoys writing about real people.  “A Few Good Men,” “The Social Network,” and “Steve Jobs” come to mind.  But this time he’s found a humdinger.  Molly Bloom was an Olympic skier whose career came to a crashing halt following a freak accident in 2002.  Against her father’s wishes, Bloom takes a year off before law school, moves to Los Angeles, and begins working for Dean Keith, a powerful real estate agent who happens to operate a weekly high-stakes underground poker game.  He asks Molly to help him with the games – checking in each player, securing their buy-ins, keeping the books, providing drinks, and so forth.

While Keith’s operation is legal (in other words, he never skims any money off the top for himself), he is a boorish jerk who treats Molly like a subservient lackey.  Eventually, Molly has had enough, and starts her own poker game.  By now, she’s so well-known, her games attract Hollywood power brokers, celebrities, athletes, and business tycoons.  Molly continues to run a legitimate operation, making all her money from tips. 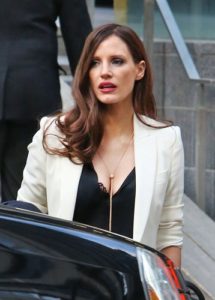 As Bloom, Jessica Chastain turns in what I believe to be the best performance in her storied career.  Remember how good she was in “The Help” and “Zero Dark Thirty?”  She’s better here!  Her Molly Bloom is similar to her CIA agent in “Zero Dark Thirty,” in that she is driven to succeed.  But thanks to Sorkin’s witty and rapid-fire dialogue, Bloom comes off as both brilliant and compelled. 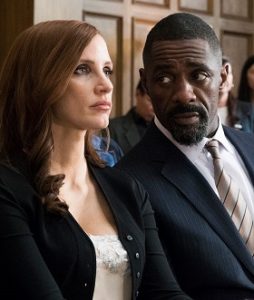 Following her arrest by the FBI, Molly seeks out a “clean” attorney, and lands one Charlie Jaffey, played to the hilt by Idris Elba.  Jaffey is also brilliant, and the repartee between him and Molly is like a Mensa version of “Moonlighting.”  This is extremely well-written stuff, and these two actors bask in its glory.  Both should be nominated for Oscars, and Chastain might just be my choice to win.

Sorkin adapted his screenplay from Bloom’s autobiographical novel “Molly’s Game: From Hollywood’s Elite to Wall Street’s Billionaire Boys Club, My High-Stakes Adventure in the World of Underground Poker.”  As the title suggests, Molly eventually moves her operation to New York, and becomes involved with the Russian mafia.  Tracing each milestone in her operation is akin to the structure of Martin Scorsese’s best mob films (“Goodfellas,” “Casino”), in that her stratospheric rise is bound to be followed by a catastrophic fall.

I typically don’t like motion pictures told in constant flashback, or that jump around among different time periods.  I have no issue with the structure, but its overuse is annoying, and allowing the characters to speak in voice-over from the future often replaces what should have been a better script in the first place.  It’s a cheap method of letting us know what the characters are thinking.

Within the first ten minutes of “Molly’s Game,” we’re treated to her FBI arrest, followed by her appointment of Jaffey to handle her defense.  As Jaffey questions her over a period of days (and reads her autobiography), we see Molly’s stories play out on celluloid.  And I say “stories” (plural) because we don’t simply revisit her poker empire, but interspersed are scenes of her childhood.  There’s so much going on here, it should be difficult to follow in terms of time period.  But it isn’t.  Each morning in his office, Jaffey begins his questioning of Molly based on something he had read in her book the night before.  Her response triggers another chapter in the film.  Again, thanks to Sorkin’s very tight screenplay, I actually enjoyed the flashback structure for once.

Kevin Costner is excellent as Molly’s equally brilliant father, whose expectations of Molly were through the roof.  As a young student, he would assign her additional work – not so much because he knew she could handle it, but because his desire was to broaden her knowledge.  Of absolutely everything.  As an Olympic skier, he expected her to win.  Every single time.  In an early scene in Jaffey’s office, Molly takes an instant liking to his school-aged daughter.  She’s very smart, and her father gives her a little extra work too.  But the similarity isn’t revealed until later on, which causes the inclusion of this technique to seem less obvious than had this screenplay been written by many others.

“Molly’s Game” is one of the best mainstream pictures I’ve seen in a long time.  Most audiences will enjoy it, although the dialogue is quick and brainy.  If you take a bathroom break, you will miss something.  And when it’s over, you won’t even realize the relatively long running time.  I simply can’t say enough about “Molly’s Game.”