GREENSKY BLUEGRASS will be returning to Indianapolis on Thursday January 18th at 8:00pm in The Egyptian Room at Old National Centre. 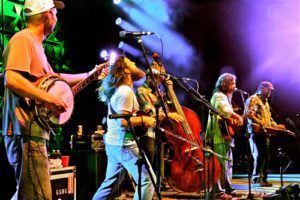 Playing as many as 175 shows per year, Greensky Bluegrass have graduated to headlining status at some of the country’s most iconic venues, selling out amphitheaters like Red Rocks, and world-class auditoriums like the Ryman. They’ve become a regular name on the festival circuit as well, adding Bonnarroo, the New Orleans Jazz Festival, Austin City Limits, Forecastle, and Outside Lands to their touring schedule. Supported by a grassroots audience whose members often travel for hours to see the band, Greensky Bluegrass is still a proudly independent act, enjoying the success of a major-label act – including a No. 1 debut on the Billboard Bluegrass chart for their fifth album, 2014’s If Sorrows Swim – without giving up complete control of their own business. Greensky Bluegrass is Anders Beck (dobro), Michael Arlen Bont (banjo), Dave Bruzza (guitar), Mike Devol (upright bass) and Paul Hoffman (mandolin).