The Shape of Water

Here’s a surprise (and yes, I’m being facetious):  Guillermo del Toro’s new picture “The Shape of Water” is a fantasy horror film featuring a strange creature.  Now, here’s the real surprise:  This is one very, very good film.  Better than anything he’s ever created.  And one of this year’s pleasant surprises. 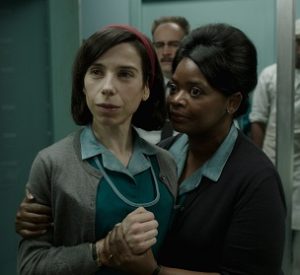 Sally Hawkins – a British actress who has never given a performance below the level of impeccable – plays Elisa, a mute cleaning lady at an Aerospace research center in the early 1960s.  Elisa and her co-worker friend Zelda (Octavia Spencer from “The Help” and “Hidden Figures”) happen to be working near a water tank when Colonel Richard Strickland (a perfectly evil Michael Shannon) arrives with an “asset” he’s recovered from a river in South America.

At first out of sheer curiosity, Elisa begins to spend time with the unnamed asset – an amphibious humanoid beast who softens his frightening demeanor when he’s with her.  Elisa brings the asset various items of food, teaches him sign language, and plays him some of her favorite music on a phonograph.  Meanwhile, Strickland tortures the asset with a cattle prod, and seems to enjoy doing so.  This causes the asset to bray loudly and swipe at him with his claws – resulting in the loss of two of Strickland’s fingers.  In case you missed it, the manifest message here is that you catch more bees with honey than with a cattle prod.

Upon overhearing Strickland’s superior advising him that he intends to harvest the asset’s body for space exploration, Elisa devises a scheme to rescue the asset from the facility.  This proves to be a huge undertaking, considering the superstructure operates three shifts, and security cameras are pointed at every square inch.  Elisa employs the talents of her closeted next-door neighbor, a struggling commercial artist named Giles – hilariously portrayed by Richard Jenkins.  Although it doesn’t advance the plot, Giles is convinced he’d look better with a toupee – leading to some of the funniest scenes in “The Shape of Water.”  The fact that he’d rather watch old MGM musicals than the national news also struck me as amusing.

As this is the early ‘60s, there’s a cold war element to “The Shape of Water” as well.  Michael Stuhlbarg plays Robert, a facility scientist vehemently opposed to harming the asset in any way.  Come to find out, Robert’s real name is Dmitri, and his Russian superiors want the asset for themselves.  There’s a lot going on here, but the screenplay is not difficult to follow.  What is hard to imagine is that a mute janitor could outsmart the powers that be (both American and Soviet).  But thanks to a top-notch screenplay by del Toro and former “Game of Thrones” writer Vanessa Taylor, the film’s third act is both conceivable and credible.

The third act involves Elisa’s escape plan and Strickland’s effort to thwart it.  It’s a hair-raising sequence, and Shannon flaunts his acting chops by giving us one of the two creepiest villains of the year.  (The other was Will Poulter’s bigoted city cop in Kathryn Bigelow’s “Detroit.”)  All the loose ends of the plot come together in what should be a big showdown, but instead results in the film’s one misstep.  I found the ending to be preposterous.  I realize we’re talking about a humanoid sea creature, but since the rest of “The Shape of Water” takes place in reality, I believe the ending should too.

Another of year’s best

Still, there’s no denying “The Shape of Water” is one of the year’s best films – and certainly my favorite del Toro vehicle so far.  Credit the screenplay – one of the year’s best.  Credit Sally Hawkins – the actress who has now delivered the two best performances of the year (in “Maudie” and now in “The Shape of Water”).  She deserves a Best Actress Oscar nomination for at least one of them.  And Michael Shannon continues to amaze me.  His hardened police detective was the best acting work of last year’s “Nocturnal Animals.”  His Col. Strickland character is perhaps the best male performance I’ve seen this year.

Save for the ending, “The Shape of Water” quickly joins my short list of the year’s best pictures – along with “The Florida Project,” “Lady Bird,” “Ingrid Goes West” (another film with a less-than-satisfying coda), “Maudie,” “The Big Sick,”  and “Wind River.”  As I really never have before, I now look forward to seeing what else del Toro has up his sleeve.  I anxiously await his next work.