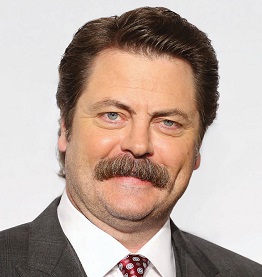 Back by popular demand, humorist, writer, and woodworker Nick Offerman will bring his highly successful Full Bush solo stand-up show back on the road. Offerman will return with a collection of his sawdust-y musings on survival in the wild, living with enthusiasm, and most importantly, the cultivation of fulsome body hair. His previous comedy show American Ham was a special on Netflix that aired in 2014 and most recently, he and his wife Megan Mullally toured their show Summer of 69: No Apostrophe, which became an EPIX special. Best known for his role as Ron Swanson on NBC’s “Parks and Recreation,” Offerman also recently starred alongside Michael Keaton in “The Founder” as well as Sam Elliot in “The Hero.”