Famed astronomer and physicist NEIL DEGRASSE TYSON will speak Tuesday, December 5th at the Murat Theatre at Old National Centre.  His topic?  “An Astrophysicist Reads the Newspaper.”  The show gets under way at 7:30 December 5th. 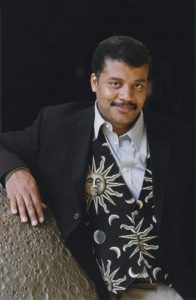 Neil deGrasse Tyson was born and raised in New York City where he was educated in the public schools clear through his graduation from the Bronx High School of Science. Tyson went on to earn his B.A. in Physics from Harvard and his PhD in Astrophysics from Columbia. His professional research interests are broad, but include star formation, exploding stars, dwarf galaxies, and the structure of our Milky Way. In addition to dozens of professional publications, Dr. Tyson has written, and continues to write for the public. Among Tyson’s 13 books is his memoir The Sky is Not the Limit: Adventures of an Urban Astrophysicist and Origins: Fourteen Billion Years of Cosmic Evolution, co-written with Donald Goldsmith. Tyson’s latest book, released in May 2017, is Astrophysics for People in a Hurry. This adorably readable book is an introduction to all that you’ve read and heard about that’s making news in the universe – consummated, in one place, succinctly presented, for people in a hurry. Tyson is the fifth head of the world-renowned Hayden Planetarium in New York City and the first occupant of its Frederick P. Rose Directorship. He is an associate of the Department of Astrophysics at the American Museum of Natural History.