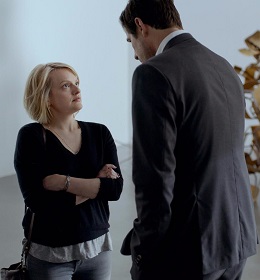 We routinely walk past the homeless on the city streets.  We customarily shun the beggars – including the supposedly homeless veterans who hold up signs at highway exit ramps.  But do we ever stop to walk a mile – or even a few yards – in their shoes.  Such is the question posed – as nearly as I can tell – in Ruben Ostlund’s Palme d’Or winning “The Square” – a film about how the movers and shakers view the less fortunate.  Again, as nearly as I can tell.

Too many story threads

There are so many story strands in this 2.5-hour drudge that I find it difficult to mentally tie them all together into any kind of meaningful analysis.  Yes, a high-society art museum curator earns his comeuppance by a young low-rent apartment-dwelling boy.  But there is so much else going on here that it’s easy to miss the message in a feeble and useless attempt to simply make sense of it all.

Claes Bang (a Swedish David Duchovny) plays Christian, the curator of a Swedish modern-art museum who pines for national (if not worldwide) attention.  Employing the services of a young ad agency, Christian is led to believe that he must attract national attention via social media to harness interest in the museum’s latest exhibition, The Square, a brightly lit square which is said to be place of solace – where all are equal and none are superior to others.

The resulting YouTube video is a disgusting video of a young beggar girl blown to bits inside The Square – exactly the opposite of its intentionality.  The ad is as loosely based on the intent of the art as “The Square” is to what I believe to be its purpose.  Perhaps that’s Ostlund’s motive – but his original screenplay is so ambiguous it’s hard to tell.

In addition to the artwork narrative, Christian is involved in a more interesting thread in which he is pickpocketed by a skilled trio of crooks who manage to steal his wallet and cell phone.  With the help of a subordinate, Christian pinpoints the exact apartment complex in which the thief dwells.  He then proceeds to deliver a letter to each of the residents demanding the return of his belongings.  This inevitably leads to the ostracizing of a young boy by his parents – who accuse him of being the thief.  It is this story of Christian’s effectuation of his actions on those of another socioeconomic class that is the meat of “The Square” – at least as I see it.

American actress Elisabeth Moss plays Anne, a Hollywood reporter who takes a liking to Christian, in another storyline that would appear to have nothing to do with Christian’s caste recognition.  Nor would the fact that she keeps a chimpanzee as a pet – a facet of her life which never receives verbal recognition in the screenplay, thereby rendering it not only worthless but so weird as to diminish whatever affect the film would have on us in the first place.

As if that weren’t random enough, the apogee of the arc of the screenplay would seem to be a dinner of museum benefactors and bigwigs who are “entertained” by a Neanderthal-esque man impersonating a wild animal (somewhat of a chimpanzee, in what was probably contrived as an ironic twist) who overplays his welcome in a scene which is not as embarrassing to Christian and his museum moguls as it is to the viewers of Ostlund’s film.  I love Quentin Tarantino’s cinematic trick of scenes that play out too long.  But Tarantino is a master with this technique.  Tarantino plays it for laughs.  If Ostlund’s endeavor was to play this scene for laughs, he’s ruined his entire movie with its inclusion.

Don’t get me wrong.  There is some good stuff in “The Square.”  But Ostlund should have concentrated on the robbery and its subsequent effect on the boy – and eliminated all the “art for art’s sake” junk that ultimately sinks “The Square.”  Perhaps this experiment will be nominated for Best Foreign Language Film at this year’s Oscars.  If so, there is bound to be something else more deserving.  Seeing “The Square” only makes me wonder how bad were the other Palme d’Or nominees at Cannes this year.