The University of Indianapolis Passport Series proudly presents DAMIEN ESCOBAR in concert at the Palladium on Friday, December 1st at 8:00 PM.  Tickets are on sale now, and start at $25.00. 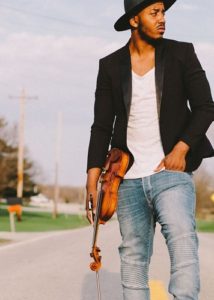 A native of Queens, N.Y., rising-star violinist Damien Escobar was only 10 years old when he became the youngest musician ever admitted to The Juliard School. He and his brother began performing in the New York subways, mixing classical and contemporary influences as a duo called Nuttin’ But Stringz. They soon gained fame, winning a talent contest at the Apollo Theater, making the finals on America’s Got Talent and performing at the White House and the 2009 Presidential Inauguration.

After the pair split in 2012, Escobar struggled personally and professionally and even abandoned music for a time. Since bouncing back as a solo artist and bandleader, the self-described “violin crooner” has found new success with his crossover blend of classical, jazz, pop, R&B, and hip-hop, landing numerous appearances on TV and at national events.