A couple weeks ago, I noted that most Christmas movies are sweet and sappy, designed only to leave their audiences feeling good about humanity.  But remember, most Christmas movies harken back to the feel-good post-war era of the 1940s and ‘50s.  There are hardly any Christmas films produced today.  Quick, name one.  See? 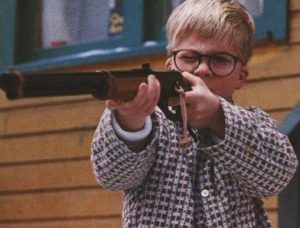 But there is one modern-day Christmas classic – a film that bombed upon its original release in 1983, but became a huge hit on television and in various forms of home video throughout subsequent years.  That picture is Bob Clark’s “A Christmas Story,” based on Hoosier author Jean Shepherd’s musings from his 1966 book “In God We Trust: All Others Pay Cash.”

If the generic title “A Christmas Story” doesn’t ring any bells, this is the movie about nine-year-old Ralphie Parker (Peter Billingsley), who wants nothing more for Christmas than a Red Ryder BB Gun.  Much of Shepherd and Clark’s adapted screenplay is devoted to Ralphie’s quest.  We learn how Ralphie has learned to apply for (cheap) prizes from his favorite comic books – and how he learned about the Red Ryder from this source.  We see anyone in an authoritative position (his mother, his teacher, even a department store Santa) reject the BB gun request, lest it accidentally “shoot out his eye.” 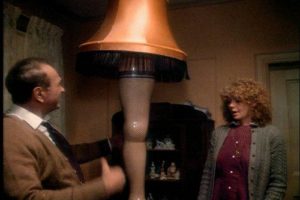 Interwoven into this primary theme are several episodic chapters involving life (circa 1940) as viewed through the eyes of a preadolescent boy – including the now-infamous scene in which one of Ralphie’s friends accepts a dare, only to get his tongue stuck to a lamppost.  One of the two funniest vignettes involve Ralphie’s father (Darren McGavin) who wins a table lamp in the shape of a fishnet-stocking clad female leg.  Dad loves it; Mom hates it.  Over the ensuring years, the “leg lamp” has actually become part of our culture.  If you find one at a garage sale, its origin can be directly traced to “A Christmas Story.”  The other funniest installment follows the Parker family to a local Chinese restaurant for Christmas dinner.  Don’t ask; just watch it.

There are also amusing running jokes, such as the unbridled canines of the Parker’s next-door neighbor, the ever-malfunctioning furnace, and Ralphie’s unfortunate altercations with the neighborhood bullies.  This is a slice of pure Americana, narrated with just the perfect touch of whimsy by Shepherd himself – akin to Daniel Stern’s narration on “The Wonder Years.”  The writing and cinematography are so ideal they make viewers long for the simpler days of youth – during which time seemed to pass slowly, and each day involved a myriad of small adventures.

Great age for a story

Perhaps the use of a nine-year-old protagonist is one of the key elements to this film’s ongoing success.  Most motion picture youth are teenagers.  After all, there are many possible angles to the subjects of teenage romance, high school, the college years, and so forth.  But hardly any films focus on those younger than middle school.  That “A Christmas Story” is so absorbing and droll makes me wonder why Hollywood hasn’t explored this age in greater detail.

Much of the success can directly be attributed to young Peter Billingsley.  While Shepherd’s voice-over is spot-on, Ralphie is a tough character to nail.  Play him too knowing and the whimsy is lost.  Play him too unaware and the character isn’t smart enough to match the narration.  It’s a fine line to walk, and Billingsley masters every single scene.  Melinda Dillon is also strong as Peter’s doting mother.  And character actor Darren McGavin was never better than his role here.  He’s gruff and firm, but loves his family – the classic all-American pre-babyboom father.

Each character is fleshed out accurately in the screenplay, and each episode is either (a) one that would concern a nine-year-old boy, or (b) one told from his point of view (such as Dad’s ongoing frustration with the furnace).  “A Christmas Story” is so good some people have made a habit of watching it in marathon form during the holiday season.  But this is one almost nobody saw in the theatre – and that’s a shame because the sense of wonderment and awe is magnified on the big screen.

Fortunately, we have a chance to see this modern-day classic this coming weekend at the Historic Artcraft Theatre in Franklin.  Due to high demand, we actually have five chances – Friday, December 1st, and Saturday, December 2nd, at 2:00 and 7:30, plus a Sunday matinee.  Don’t miss this one.  Even if you’ve seen it before, “A Christmas Story” remains one of the greatest cinematic yuletide joys of all time.