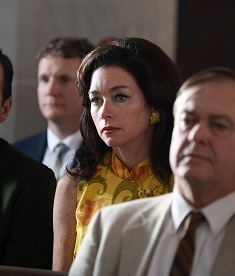 In 1954, a mother takes her young daughter to church.  Certainly not an uncommon episode for many Americans, but for these two it is.  Turns out, Nora Harris (Julianne Nicholson) is in an unhappy marriage with a boorish and (essentially) absent husband.  Tired, and a bit scared, of her parents’ constant screaming, young Cathleen describes the church service as “peaceful.”  Cathleen continues to seek refuge within the church walls.  Eventually, a nun invites Nora to consider enrolling her daughter in the local Catholic school. 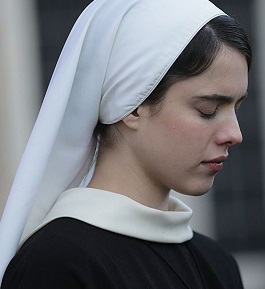 Why does any of this matter?  Because as a budding yet reserved and somewhat awkward teenager, Cathleen (now played by Margaret Qualley) makes the difficult decision to become a nun and enter the religious order at the local convent.  Her agnostic mother is distraught.  She thought she was doing Cathleen a favor by introducing her to church.  She thought she was providing a top-notch education for Cathleen – although, somewhat naively, she apparently wasn’t aware that Catholic schools teach the Catholic religion.  And now she can’t believe her only child has made the decision to secede from everyday life to become what Nora considers a hermit.

This mother-daughter relationship is just one of several alluring angles toward the sisterhood taken by first-time writer-director Margaret Betts in “Novitiate,” the best film about Catholicism to come along in many years.  Here’s another angle:  Our story began in the mid-1950s.  By the time Cathleen decides to enter the sisterhood, it would logically be the mid-1960s – a time of great upheaval in the Catholic Church.  At the behest of Pope John XXIII, the Second Vatican Council was in the process of “modernizing” the Catholic church – in an attempt to reduce or halt the mass exodus of Catholics to the Protestant denominations.  The Mass was now to be spoken in native tongues, rather than in Latin; priests were now to face their congregations, rather than the cross; and the postulant and novitiate periods of sisterhood training were to be reformed to eliminate so-called “extreme” methods.  These would include self-punishment for impure thoughts, public humiliation among the other candidates for even minor rules violations, and so forth. 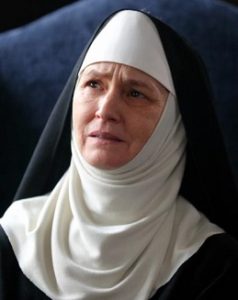 This particular convent’s leader, the Reverend Mother (a stern and uncompromising Melissa Leo) clings to the old-school methods – even refusing to discuss Vatican II with her subordinates.  Once we see where “Novitiate” is going, we are led to presume Cathleen will tire of the inflexible structure of the convent and opt to return to outside life.  Instead, Cathleen embraces her novitiate instruction, and even becomes somewhat of an example student, albeit understated, to her fellow candidates.  I do wish Betts’ screenplay had spent more time with some of the individual girls’ backstories.  For instance, when one aspirant is expelled during the earlier postulant period, we’re a little surprised with her violation, as we previously knew nothing of her background.  A little more discourse would have helped flesh out the screenplay.

But that is my only complaint with “Novitiate.”  The acting is top-notch, and the mother-daughter relationship doesn’t merely end when Cathleen applies for the sisterhood.  Nora continues to make contact, even as their interactions become more afflicted.

Furthermore, while the topic of budding sexuality is broached, it is done in a tasteful manner.  Given the ages of these girls, there is bound to be some bodily exploration, but Betts’ screenplay treats puberty with a refined sense of purpose.  When two sisters touch one another, it is not presented so much in a lesbian context as it is a longing for personal intimacy.  Refreshingly, the Catholic church is not submitted as an enemy or “bad guy.”

I was most impressed with the notion that Betts doesn’t necessarily take a side with the Vatican II debate.  When Reverend Mother announces the changes to her attendant sisters, many of them cry – even as we presume the young novitiates will be ecstatic.  I was certain “Novitiate” was going to be an indictment of the old ways of the church, and an embracing of the new order.  Instead, Betts presents us with the facts and allows us to decide.  As usual, I prefer to be treated like an intellectual adult by filmmakers, and I appreciate the open-ended design of “Novitiate.”

While most of us rejoice in the weakening of the stringent guidelines of the sisterhood training of old, we do learn that Vatican II resulted in a mass exodus of nuns from the church.  As I think about it, I used to see nuns in public all the time when I was a young boy.  Now it’s very rare to see them – although it’s difficult to tell since nuns are no longer required to wear habits.  Is this good?  It depends.  “Novitiate” presents us with the issues, but doesn’t force-feed us any answers.  What an exhilarating change!