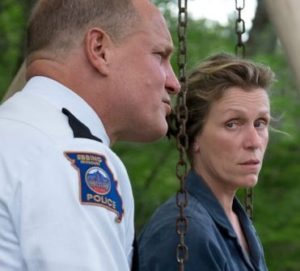 “Three Billboards Outside Ebbing, Missouri” is being billed as a dark comedy.  That description is almost too accurate, for this picture’s tone is so pitch black that it’s difficult to pigeon-hole it as a comedy at all.  This is one of those Coenesque films that comes along every year or two that reminds me how blessed we are the studios occasionally take a chance on movies somewhat outside the confines of mainstream fare.  Last year’s “Hell or High Water” was such a film; “Three Billboards” (while not as funny) is too.

Irish playwright Martin McDonagh has written and directed a film in which the screenplay is the star, and the actors are merely in its service – again, like “Hell or High Water.”  But oh my is the acting great!  Frances McDormand hasn’t had a role this juicy since her Oscar-winning turn in the Coen’s “Fargo” clear back in 1996.  Solidifying herself as one of the greatest non-mainstream actresses in history, McDormand gives a bravado performance as Mildred Hayes – a middle-aged divorcee whose teenage daughter was raped and murdered a year earlier.  Disappointed with the lack of progress in the case, Mildred rents three billboards along a country road just outside town.  They read, “Raped while dying,” “And still no arrests,” “How come, Chief Willoughby?” 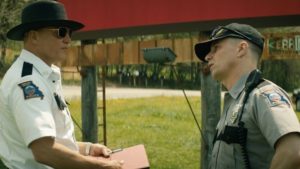 Tough stuff for a small, closely-knit town in which the well-liked and respected police chief is known to be dying of terminal pancreatic cancer.  Mildred has nothing against Willoughby personally; she just wants the case solved, and he happens to be chief of police.  Turns out, Willoughby’s a nice, patient man who understands Mildred’s frustration, and genuinely wants the case solved.  He patiently explains that sometimes cases like Mildred’s can take years to solve.  Solidifying his late-career re-emergence as the understanding good-ol’-boy authority figure (think last year’s “Edge of Seventeen”), Woody Harrelson shines as Willoughby. 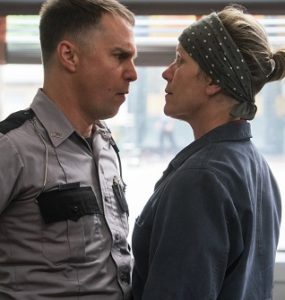 Come to find out he’s not the problem.  No, the “problem deputy” is Jason Dixon, a racist cop who finds the billboards a personal assault on his friend and boss.  Giving the best performance of his career, Sam Rockwell has as much fun with his role as does McDormand.  These are two gifted actors at the top of their crafts.  And how refreshing McDonagh didn’t feel the need to “prove” Officer Dixon’s racism by subjecting us to an uncomfortable display of intolerance.  Instead we learn through the officers’ verbiage that he happens to be racist.  Enough said.

At first we determine that both Mildred and Dixon are hard-headed characters on different sides of a town squabble.  As “Three Billboards” progresses, we learn they are each capable of downright criminal acts.  And it’s because of this severity of character that I can’t consider this film a comedy – as it has been promoted.  That’s not to say there aren’t a few very funny scenes.  But the overall tone of “Three Billboards” is very dark.

Lucas Hedges cements his stature as the current “go-to” actor when a high school senior is required in a screenplay.  He plays Mildred’s son who still feels the pain of losing his older sister, coupled with the ridicule he receives merely for being the son of the “Billboard woman.”  John Hawkes plays Mildred’s abusive ex-husband Charlie, and Australian actress Abbie Cornish plays Willoughby’s wife. 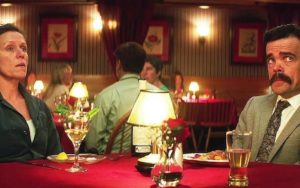 The great dwarf actor Peter Dinklage sparkles in his best role since “The Station Agent.”  Dinklage plays a used car salesman who has a thing for Mildred.  No, he doesn’t have anything to do with the story – neither does Charlie’s 19-year-old girlfriend – but I appreciate that McDonagh felt the need to include these peripheral characters.   Some films are character driven (“Lucky”).  Others are all plot (“Blade Runner 2049”).  But “Three Billboards” manages to succeed as both.  Hats off to McDonagh.  He has created a masterpiece, filled it with fascinating characters, and filled those roles with some of our greatest living character actors.  To wit, Frances McDormand is instantly recognizable, yet her performance is so focused I found myself referring to her by her character name (Mildred) rather than her real name (McDormand).

Save for particularly foul-mouthed discourse throughout, I can’t recommend “Three Billboards” enough.  This is modern filmmaking at its very best, and though it clocks in at darn near two hours, I wish it had continued for another hour.  I would love to have known what happens to these characters, but I don’t want a sequel.  My imagination will do just fine, thank you.  “Three Billboards Outside Ebbing, Missouri” is one of the very, very best films of 2017.