I’ve read that no director loves his characters quite as much as Richard Linklater.  And I understand the sentiment.  Think of his 2014 classic “Boyhood.”  Each of the four lead characters was exquisitely drawn – in such a manner that we seemed to know their inner thoughts without their even speaking them.  It helps that he had a great cast, but you get the idea. 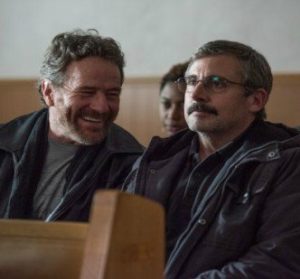 The same is true of his new film “Last Flag Flying” – a picture that manages to be anti-war while at the same time a celebration of the sacrifice young men make to protect their nation.  The three lead characters are written and played so perfectly you will know them intimately by the time the credits roll.  The versatile Steve Carell plays “Doc,” a Viet Nam vet and widower whose only son has recently been killed in the 2003 Iraq War.  He corrals two of his old war buddies – the brash partier Sal (Bryan Cranston) and the family man Reverend Richard Mueller (Laurence Fishburne) – to help him during the difficult task of burying his son at Arlington National Cemetery.  When Doc learns the Marine Corps misled him into believing his son died heroically, he decides to transport the casket to his home in New Hampshire for a proper burial alongside his mother’s grave.

This may sound like a tearjerker plot, but it actually plays out quite humorously early on, as the characters become reacquainted.  It’s during these early scenes we reinforce our awareness that military service has a unique way of bonding men who otherwise would have very little in common.  Devout atheist and lifelong womanizer Sal would never have befriended the apprehensive and devout Christian Richard, were it not for their connection in service of their country and in opposition to a common enemy.  The chemistry among the three former buddies is amusing, although Sal’s character is a bit overwrought.  Cranston’s performance is top-notch, but how many former Marines would verbally berate a Colonel over the viability of a particular war? 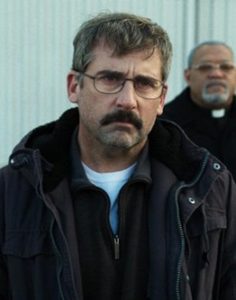 While Fishburne’s powerful voice and stern demeanor serve as a “Jiminy Cricket” style counterpart to the scheming, unstructured Sal, it’s Carell who really shines here.  Playing about as far from his obnoxious Bobby Riggs character in “Battle of the Sexes” as is humanly possible, Carell further establishes himself as one of our best current actors.  His Doc is obviously distraught, having experienced what could only be described as a depressing year, yet Carell plays the character like a Marine veteran – crying only occasionally, and enjoying the company of his old friends without coming across as clingy or maudlin.  It’s a tour-de-force performance, and serves as the anchor to the disparity of the other two.

As “Last Flag Flying” progresses, we learn about the death of a fourth comrade during a particularly difficult period in Viet Nam.  On the trip to New Hampshire (at Sal’s behest), they stop to inform the deceased soldier’s mother (the great Cicely Tyson) that her son did not die heroically, as the Marines had led her to believe.  The ensuing scene is the most poignant in the entire film.

The screenplay (by Linklater and Darryl Ponicsan, who wrote the 2005 novel) rakes the military over the coals for inflating the importance of every American death – and a bevy of American leaders for what they deem the misuse of American servicemen to fight foreign battles in countries that do not request, nor want, our “help.”  It also lays bare the difference in outlook between young undefiled recruits and older hardened veterans who know the truth.  Yet “Last Flag Flying” does not bash the military the way, say “Full Metal Jacket” does.  It’s a celebration of those who serve, and Ponicsan does not castigate their decision to do so.  It almost works as a companion piece to the recent “Thank You for Your Service,” which laid bare the prevalence of post-traumatic stress disorder among returning vets, and the difficulties associated with applying for benefits.

As a side note, Ponicsan wrote “Last Flag Flying” as a sequel of sorts to his 1970 novel “The Last Detail,” which Hal Ashby made into another excellent film in 1973.  In that story, Jack Nicholson played the wild man character (more believably that Cranston’s caricature), and Otis Young the more reserved counterpart.  Fortunately, it’s not necessary to have seen the ’73 offering, or to know the slightest thing about it, prior to viewing “Last Flag Flying.”

Another winner for Linklater

This one might become one of the best remembered pictures of 2017.  It’s funny enough to garner a wide audience, but serious enough to interest more mature patrons.  I can’t quite put it in the same class as “Boyhood,” but it’s yet another feather in the cap of Richard Linklater – one of our best active directors.