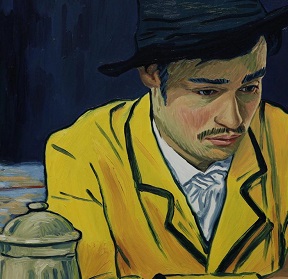 Although I’m a music aficionado, I know next to nothing about art.  That’s why I’m ecstatic when I see a picture that makes me excited about art.  A couple years ago, I fell in love with Tim Burton’s “Big Eyes,” the story of Margaret Keane and her husband Walter, who took credit for her paintings in the 1960s.  Perhaps because of my artistic ignorance, I have been hesitant to see Dorota Kobiela’s and Hugh Welchman’s “Loving Vincent.”  I know each of the film’s 65,000 frames has been carefully created by a team of 125 artists.  But my fear was it simply would not reach me – the way some films about musicians don’t reach those without a strong background in music (Milos Forman’s “Amadeus” being the glaring exception).

I am proud to say I liked “Loving Vincent,” and I learned some facts about the tragic artist I did not know before.  But I admit I was more impressed with the means than the end.  I was previously aware enough of Vincent van Gogh’s paintings to identify one (or at least a reasonable facsimile) if presented with one.  I know how van Gogh’s paintings appear to be in constant motion – what with the lines of the faces and the background painted in such a manner that they seem to be going somewhere.  I’m happy to say each individual scene in “Loving Vincent” achieved that milestone.  Kobiela and Welchman (and their team of artisans) begin with a van Gogh painting, and then move it into their own narrative.  The process is almost more fascinating than the story itself.

The structure of the film

Borrowing a bit from Oliver Stone’s “JFK,” “Loving Vincent” hypothesizes that van Gogh may have been murdered rather than having committed suicide, as is popularly suspected.  The film’s structure follows Armand, the son of van Gogh’s postman, as he attempts to deliver a letter the late artist wrote to his loving and supportive brother Theo – only to discover that Theo had himself perished from syphilis just months after Vincent.  From his discussions with the townsfolk (in a suburb of the art mecca of Paris), the postman’s son resolves to relinquish the unopened letter to van Gogh’s doctor, who housed him upon his release from what was then known as an insane asylum.

In his two-day quest to receive audience from the doctor, Armand proceeds to garner intelligence from everyone from the local innkeeper’s daughter to the area boatman.  With each interview, we are privy to additional information regarding the late artist.  At the film’s conclusion, we learn that each of these interlocutors was in fact a real person, each of whom had some stake in van Gogh’s legacy.  The irony is that van Gogh only began painting at age 29, and died at age 37.  Even Mozart’s productivity encompassed more years than van Gogh’s.  And upon his death, the penniless van Gogh had sold a whopping single painting.  He is now considered the father of modern art.

His was a short, tragic life.  One that simply can’t be told in just one motion picture – although “Loving Vincent” is far superior to Robert Altman’s 1990 dud “Vincent and Theo.”  Van Gogh was a complex and tortured man.  And “Loving Vincent” accurately portrays his internal persecution – albeit from a post-demise perspective.  I suppose I would have preferred a story about van Gogh’s actual life – although I can’t deny I was impressed with Kobiela’s and Welchman’s result. 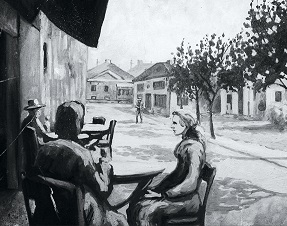 I particularly liked the way the frequent flashbacks (to the time when van Gogh was alive) were presented in an equally aqueous black and white.  But as if to acknowledge that the black and white sequences are antecedent, the backgrounds (including people) are less fluid than those of the color scenes.

“Loving Vincent” caused me to learn a lot about van Gogh’s life that I didn’t previously know, but it simply didn’t move me the way, say “Big Eyes” did.  Conversely, “Big Eyes” was likely manufactured in just a few weeks, whereas “Loving Vincent” has assumably been in the works for years.  I admire “Loving Vincent” more than I actually like it.  Still, it’s a big hit amongst baby boomers, and I cannot dismiss its brilliance.

And yes, Don McLean’s classic “Vincent (Starry Starry Night)” is sung over the closing credits – albeit by someone else.