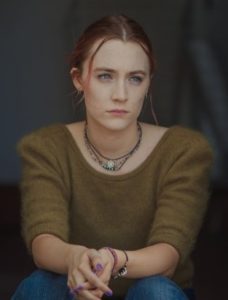 Remember Richard Linklater’s brilliant 2014 coming-of-age story “Boyhood?”  Remember how we all related to the teen milestones of smoking our first joint, sexual experimentation, and pushing parental boundaries?  Now think about “Boyhood” as told from the perspective of a girl, and with all the action compressed into one school year.  The result is Greta Gerwig’s directorial debut “Lady Bird,” starring Saoirse Ronan as the high school senior and Laurie Metcalf (from “Rosanne”) as her long-suffering mother.

While “Boyhood” featured the rest of the family (mother, father, and sister) as supporting characters, “Lady Bird” focuses primarily on the relationship between our protagonist and her mother.  She has a father (playwright Tracy Letts), but he’s busy trying to find work after being laid off.  She has an older brother (and his girlfriend), but they’re busy working entry-level jobs.  Lady Bird (the name young Christine has given herself) is trying to wend her way through the maze of high school senioritis – classes, boys, choosing a college, the school musical, and home life, in addition to the aforementioned teen milestones.

Ronan’s Lady Bird is not a bad girl, but she’s not top of her class either.  She’s rebellious to a degree, and argues about darn near everything with her mother.  Credit Gerwig’s original screenplay that we see Lady Bird’s world through not only her eyes (and yes, we were all teenagers once) but also through those of her mother Marian (Metcalf).  Marian is demanding, but not to a caricaturistic degree.  She’s not as supportive as she could be – perhaps the result of one too many of Lady Bird’s letdowns.  But she loves her daughter; and that love is reciprocated.  The mother/daughter emotion is fleeting in “Lady Bird,” but when it shows (particularly in the later scenes) we realize what a special relationship exists between these two tenacious personalities. 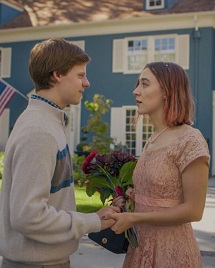 In the fall, Lady Bird tries out for the school musical to pursue lead actor Danny, played by the affable Lucas Hedges, who was so great in last year’s “Manchester by the Sea.”  Her relationship with Danny introduces her to the wealthier side of the tracks, and Lady Bird eats it up, wishing for a higher socio-economic status from her own family.  Second semester, Lady Bird pursues Kyle, a “bad kid” with a reputation.  But it is through Kyle that she meets Jenna, the most popular girl in the school – a girl of which Lady Bird has been envious for some time.  Lady Bird learns some harsh lessons about her new friends the night of prom, eventually returning to her best friend Julie (an excellent Beanie Feldstein). 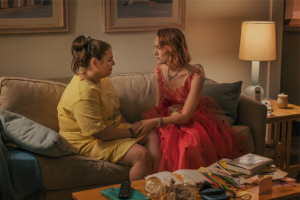 Add to this mix Stephen McKinley Henderson (from last year’s “Fences”) as the priest in charge of the school musical, and veteran actress Lois Smith as an understanding nun, and “Lady Bird” succeeds as one of this year’s very best films.  There are some overt scenes, such as when Lady Bird buys cigarettes, a lotto ticket, and a Playgirl on her eighteenth birthday.  But most of the picture seems authentic.  Lady Bird’s relationship with Julie is right out of real life, and her pursuit of boys doesn’t seem mannered and pretentious, as it is in most teen coming-of-age stories.

I suppose the “star” of “Lady Bird” is Gerwig’s sterling screenplay, but the two leads are out of this world.  Playing a character about as distant from her demure Irish lass in “Brooklyn” as possible, Saoirse Ronan proves that she will be one of her generations greatest actresses.  And Laurie Metcalf is so believable in the mother role it makes me wonder why Hollywood doesn’t utilize her enormous talent more regularly.

I equate “Lady Bird” somewhat with last year’s Hailee Steinfeld vehicle “The Edge of Seventeen,” although that picture was strictly a comedy.  This one has enough drama mixed in to put it in a higher class – one occupied by “Boyhood,” and that’s very high praise.  Don’t get me wrong; there are some very funny scenes.  When Father Leviatch takes ill, the football coach is called in to direct the spring play.  The result is one of the most hilarious fish-out-of-water episodes in recent motion picture history.  It’s a real scream, and it doesn’t necessarily progress Lady Bird’s story so much as it adds flavor to the screenplay.  Yes, “Lady Bird” is a film about a high school senior, but it’s also a film about her surroundings – about the people in her life, their effect on her, and their importance to her.

As with “Boyhood,” the final scenes involve Lady Bird’s first days in college – clear across the country in the big city of New York.  As with “Boyhood,” I wasn’t ready for our story to end.  I’d like to see a sequel in which we follow Lady Bird’s college career, and her long-distance relationship with her mother.  It’s rare that a movie leaves me wanting more.  Such a feeling is testament to one of the greatest pictures of the year.