Let’s face it.  Most Christmas movies are sweet, sappy, sentimental shlock, with the basic intent of making us feel good about humanity.  We are to leave the theatre with that proverbial warm, fuzzy feeling of the season coursing through our veins.  Great cinema?  No, but who cares.  It’s Christmas, after all. 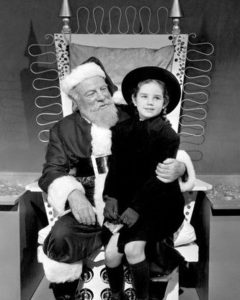 Which brings us to the Historic Artcraft Theatre’s annual line-up of Christmas flicks, sure to delight the young and old.  And delight they do.  Save for Christmas Vacation, (which is an annual sell-out, so I shall keep my opinion to myself), this year’s selection features some of the best (and yes, schlockiest) Christmas films ever made – beginning with this coming weekend’s selection, George Seaton’s 1947 classic Miracle on 34th Street.  If you’re old enough to remember this one from your childhood, there’s nothing like seeing it again on the big screen rather than on television.  If you’re young, you are in for a treat!  20th Century Fox’s Miracle on 34th Street is one of the best Christmas pictures ever churned out by the old Hollywood system.

To understand the plot, youngsters will need to have a basic understanding of the way Americans used to shop.  During the prosperous 30 years immediately following World War II, there weren’t strip malls on every corner.  People went downtown to shop.  No matter the size of the city, you’d don your Sunday best, and take the car, the train, or the bus all the way downtown for a magical day of Christmas shopping.

The major retailers had just one store in each city.  And they were located downtown.  There were moving window decorations to delight the kids while Mom and Dad shopped for every relative on their Christmas lists.  Some stores had little trains for kids to ride.  Some featured little North Pole workshop replicas.  But the biggest treat of all was sitting on Santa’s lap and telling him what you wanted for Christmas.  He’d ask you if you’d been a good little boy or girl, and you’d answer in the affirmative (whether it was true or not).  It was similar to Santa at the mall today, only far more special.  After all, driving downtown was something special.  Most suburban families didn’t venture downtown every day the way we stop at the mall almost weekly nowadays. 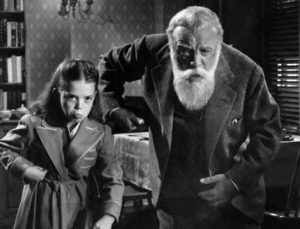 For a little girl named Susan (eight-year-old Natalie Wood, in her first major role), her visit to Santa sets off a chain of events that could only happen in the movies.  You see Macy’s has hired the real Santa (British character actor Edmund Gwenn) to play Santa this year.  Impossible, you say?  “Santa” volunteers to play “himself” during Macy’s annual Thanksgiving Day Parade when the hired Santa arrives drunk.  He does such a great job, Macy’s signs him to be their store Santa for the Christmas season.  The problem is the man’s real name appears to be “Kris Kringle.”

But far be it for Macy’s to deny a money-making opportunity.  This Santa proves so popular the newspaper publishes a feature about him, and soon every kid in New York is begging Mom and Dad to take him to Macy’s.  The line stretches seemingly forever, but Santa remains very patient with each child.

The conflict arises when some adults accuse Macy’s Santa of being a fraud.  One of the original skeptics is Susan’s mother Doris (Maureen O’Hara), who has raised her daughter not to believe in fairy tales.  Her neighbor, attorney Fred Gailey (John Payne) steps up to the plate to treat young Susan.  But after passing a psychological evaluation, Kris is committed to Bellevue when he’s tricked into hitting a customer with his cane.

The big courtroom trial pits the “anti-Santa” forces against the “pro-Santa” camp.  Fred defends Kris, and the judge is left to decide if Santa is in fact real.  Suffice to say that this movie is “safe” for all kids old enough to understand a court trial.  In fact, if the youngest members of your family are on the verge of disbelieving Santa Claus, Miracle on 34th Street should give them at least two more years of starry-eyed wonder.

Gwenn is the star

While O’Hara and Payne were given top billing (as they were both big names in 1947), the real star here is Edmund Gwenn.  His Santa is so convincing I almost believe in Santa every time I watch him.  I particularly love when Seaton (who also adapted the screenplay) has Santa speak in Dutch to a girl who knows no English.  And when he sends a parent to a competitor store for a better price on a particular item.  At first Macy’s management is furious – until they realize this sense of honesty is exactly what endears New Yorkers to their Santa in the first place.

Gwenn won a Best Supporting Actor Oscar for his performance, although he should have appeared in the Lead Actor category instead.  (Hollywood has been misassigning categories for eons, it seems.)  And it’s almost spooky how great a child actress Natalie Wood is.  She almost steals the show from Gwenn.  Along with It’s a Wonderful Life – which plays in a couple weeks – Miracle on 34th Street is the best of this year’s Christmas films at the Artcraft.  Catch it this Friday, Saturday, and Sunday, November 17th through 19th at the Historic Artcraft Theatre in downtown Franklin.