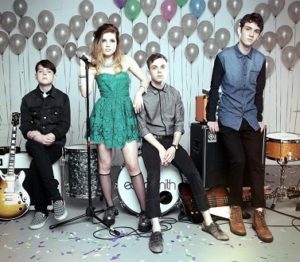 Echosmith returns with their highly anticipated sophomore album, Inside A Dream. The 11-song set marks the long-awaited follow-up to their 2013 Gold-certified debut Talking Dreams, which spawned the triple-platinum breakout hit “Cool Kids” and platinum-certified “Bright.” They have earned rave reviews from the likes of ELLE, Rolling Stone, NYLON and more for their distinctive melody-minded, New Wave-influenced sound, and have performed on Ellen, The Tonight Show Starring Jimmy Fallon, The Today Show, Late Night with Seth Meyers and more. The Sierotas – Sydney (vocals / keyboard), Noah (vocals / bass), and Graham (drums) – have played to crowds of thousands at festivals and with sold-out shows in the U.S. and Europe, and even joined Taylor Swift as special guests on her 1989 Tour in Philadelphia to perform “Cool Kids.”