Todd Haynes’ new film “Wonderstruck” is the first big-budget picture to address the subject of deafness since “Children of a Lesser God” in 1986.  “Wonderstruck” interweaves two stories, set 50 years apart, each involving deaf children, and which are seemingly unrelated until the very end. 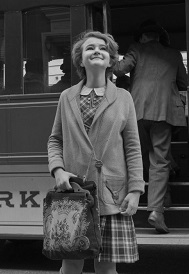 In 1927, Rose (newcomer Millicent Simmonds) is an approximately 12-year-old deaf girl being raised by her strict father in Hoboken, New Jersey.  On the day her new hired tutor arrives, Rose escapes to New York in search of her idol, a silent film star named Lillian Mayhew.

Meanwhile, in 1977, Ben (Oakes Fegley from “Pete’s Dragon”) is an approximately 10-year-old Minnesota boy who (perhaps temporarily) loses his hearing in a freak lightning accident.  His mother has just died, and Ben jumps a Greyhound bus to New York in search of his father – a man he’s never met, and about whom his mother told him very little.

Each story is interesting, although I preferred Ben’s – there’s simply more going on in his narrative.  Each story involves deaf children.  And each story involves New York.  In fact, New York is practically a character in both yarns.  As he did in 2015’s “Carol,” Haynes proves himself a master of recreating the New York of days gone by.  Rose’s 1927 New York is a pallet of tall, radiant skyscrapers bursting with the energy of the well-dressed residents and visitors below.  Shot in black and white, and without sound (at least the spoken word), the 1927 New York looks like the silent films of the day – those of which Rose is so fond.

Fortunately, Ben makes a friend in Jamie (newcomer Jaden Michael), whose father is a curator at the American Museum of Natural History in New York.  His position apparently allows Jamie free reign of the museum, and that’s where much of the action takes place.  In fact, both stories converge on the museum at approximately the same time.

I’ve never been a fan of films in which the director cuts back and forth between flashbacks and present-day action at lightning speed.  That’s what Haynes and screenwriter Brian Selznick (who adapted his own novel) have given us here, although in this case the editing makes a point.  It is their intent to tell both stories simultaneously.  Plus, Rose’s story isn’t interesting enough to stand on its own.

Music is the real star

I love the fact that Rose’s story (and, for a while, Ben’s) is told without spoken voice.  The only sound we hear for long stretches of screen time is music.  And I must give a strong shout out to veteran film composer Carter Burwell, whose original and appropriated music is used to tell a story – two stories, in fact.  And from the point of view of deaf children.  It’s as if Burwell provides the soundtrack to the inner thoughts of the kids.  That’s a tall order, and he succeeds brilliantly.  I hope his work garners a nomination for Best Original Score.

Oakes Fegley is excellent as Ben, although not quite in the same category as Jacob Tremblay in “Room.”  This is Fegley’s picture (more so than Simmonds’), and he allows us to experience his feelings through what turns out to be very little dialogue.

Deserves to be seen

I like “Wonderstruck.”  It’s relatively inconsequential, and doesn’t necessarily teach us anything about the deaf we didn’t know (or presume) already.  But it’s a pleasant two-hour escape from the rigors of everyday life, which provides us the opportunity to see the world through a different lens than that which we are used to.  It likely will not make my list of the year’s ten best films, but I hope it finds an audience.  “Wonderstruck” deserves to stick around theatres this fall.