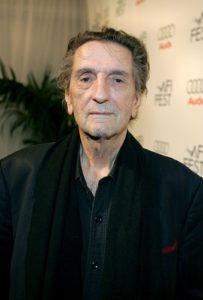 Harry Dean Stanton is a national treasure.  Never heard of him, you say?  He’s the type of character actor you most likely don’t know by name.  But you know him.  He’s been in everything from “Cool Hand Luke” to “Pretty in Pink” to “The Last Temptation of Christ.”  You’ll certainly know his unassuming but instantly recognizable voice.  His masterpiece was Wim Wender’s 1984 indie “Paris, Texas,” which won the Palme D’Or at that year’s Cannes Film Festival.  Now at age 90, Stanton has made another independent film which has the potential to become a classic (although I don’t think it will ever live up to the standard set by “Paris, Texas”).

Television and film character actor John Carroll Lynch serves as first-time director for “Lucky,” which tells the story of a 90-year-old chain smoker who has somehow outlived his generational peers in an isolated desert town somewhere in the great American Southwest.  “Lucky” is really more of a character study than it is a story.  Stanton’s character is nicknamed Lucky, and we’re led to believe he’s had that name so long some townsfolk don’t even remember his real name.  The press notes describe Lucky as a 90-year-old atheist on a spiritual journey, although religion is a subject never broached by the Logan Sparks and Drago Sumonja screenplay. 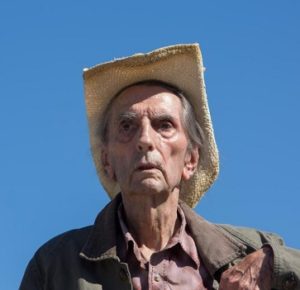 During the initial set-up, we learn that Lucky lives alone in a small, old ranch house.  He still cooks his own meals, and maintains his own property.  He performs a myriad of yoga exercises every morning.  And he smokes.  A lot.  And he laments the fact that he can’t smoke in any public building anymore – even the town pub where he spends his evenings.  In a town small enough to mask isolation, others seem to like Lucky, although he doesn’t appear to be particularly close to anyone.

One morning Lucky falls, necessitating a trip to see the local doctor (Ed Begley Jr.).  Finding all his vital organs in good working condition, the Dr. Kneedler reluctantly refuses to scold Lucky for his tobacco habit, verbally figuring that if he’s made it this far he may as well continue until he dies.  The combination of the initial fall and his doctor’s focus on his mortality manifest themselves in Lucky’s so-called “spiritual journey.”  It’s really more of a discovery of his own beliefs and feelings than it is a journey, and the script underplays the impact on Lucky himself.

Lucky begins to recall childhood dreams in which his greatest fear is the vast nothingness that lay beyond the world he knows and is comfortable inhabiting.  He watches others revel in their happiness – such as Elaine and Paulie, two pub regulars who have found each other in later life.  He takes advice from his friends – even from a total stranger he meets in the local diner one morning – a fellow World War II vet played by the always affable Tom Skerritt.  And Lucky befriends the cashier from the local convenience store – even making an appearance at her daughter’s birthday party.

Taking stock of a life

But don’t for a minute think Lucky is some kind of Ebenezer Scrooge character who suddenly wakes up to a new morning late in life.  No, instead Lucky takes stock of his life and determines those facets he deems important versus those not.  While he’s a hero to the store clerk, he lashes out angrily at a life insurance salesman (Ron Livingston) who insists Lucky is making a mistake by not planning for the future – even though he has no descendants and no measurable wealth.

It’s hard to say whether Lucky’s animosity is directed at the idea of paying for an unknown destiny or at the idea that his time shall soon come.  I figure it’s a little of both, but his disparate reactions to various individuals reminds me of a dog who loves some people while lashing out at others.

As the title character, Stanton has accomplished something that rarely happens in Hollywood.  He’s landed his meatiest role (or second meatiest, following “Paris, Texas”) at the end of his life.  Richard Farnsworth pulled off the same feat in David Lynch’s 1999 gem “The Straight Story.”  It was the last film Farnsworth made, and it was the crowning achievement of his career.  Two bits of irony in the comparison:  First, Harry Dean Stanton had a small supporting role in “The Straight Story.”  And second, David Lynch (no relation to John Carroll Lynch) has a supporting role in “Lucky.”

Stanton died in September at the age of 91.  Therefore, “Lucky” is the little jewel the coda to his magnificent career.  His body of work is the type of progression that goes unnoticed by most moviegoers until he’s asked to carry a film.  Then we all say, “Oh that guy!”  But Stanton was so much more than “that guy.”  Look him up on line and re-watch some of his older material.  He brought something special to each character he played – pathos, warmth, and an impish streak which has endeared him to critics and fans for years.  Go see “Lucky” and watch an understated master at work.