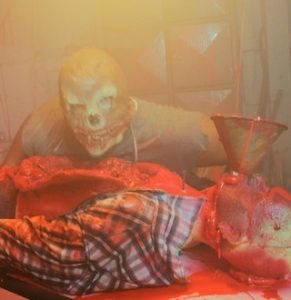 Nightmare on Edgewood (Indy’s only do-touch haunt) opens for its 39th season on Friday September 29th. New this year is MIDNIGHT DOUBLE FEATURE, a cinema-themed dose of Hollywood horror that brings victims face-to-face with all their favorite scary movie villains. KARNIVAL, last year’s popular big top attraction, returns in impressively expanded form, while iNSANITY assaults the senses in a loud, dark maze that promises to play tricks on the mind.

Also new this year is ESCAPE THE NIGHTMARE, which condenses the concept of a standard escape room into six minutes of quick-thinking sleuth work. For just $5 per person per room (yes, you can do them both!), teams of four are locked into one of two 8’X14’ rooms—either a doctor’s office, or said doctor’s morgue. The goal is to find a series of clues which will reveal a code to unlock the room. Beat the clock and your team wins Nightmare on Edgewood t-shirts! 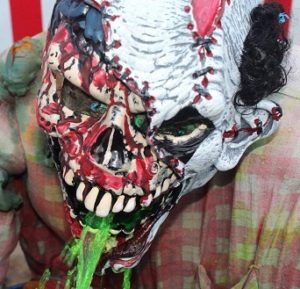 Located across 15,000 square feet on the grounds of the Edgewood Athletic Association in Indianapolis (6004 Camden St), Nightmare on Edgewood becomes undead every July when owners (and brothers) Kevin and Paul Cook start the annual task of building the framework for three separate, indoor/outdoor haunted attractions from the ground up. Nearly 50 volunteer actors occupy the halls of Nightmare on Edgewood, with an additional 12-14 staff to assist with parking, ticket sales & handling, and general maintenance & management of the haunt.