Robin Cavendish was an advocate for the rights of the disabled, and one of the longest living responauts – that is, a person dependent upon a mechanical ventilator in order to breathe.  His life is the subject of Andy Serkis’ new film “Breathe,” in which Andrew Garfield stars as the protagonist, with television actress Claire Foy as his loving and supportive wife Diana.

Following a brief courtship – and yes, this is yet another “love at first site” relationship the movies are so fond of giving us – and marriage, Robin and Diana depart for an African safari to Kenya and Nairobi.  Diana announces she’s pregnant, and within the next few days, 28-year-old Robin contracts polio.  Now Robin Cavendish was 28 in 1958 – a few years after the introduction of the Salk vaccine which essentially eradicated the disease.  Why Cavendish had (apparently) not been vaccinated is never broached by the William Nicholson screenplay.

Given mere months to live, Robin is flown home to a British hospital specializing in “treatment” (more like “housing”) of polio victims.  In one of the film’s few true dramatic scenes, Robin whispers, “Let me die” to Diana, who resolutely dismisses his request, practically requiring that he live as long as possible so he can watch his son mature.  Embarrassed to be an immobile father, Robin initially refuses to even eyeball his son for fear of attachment. 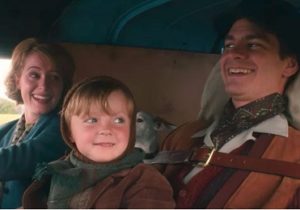 Against his doctor’s orders, Diana and her brothers discharge Robin from the hospital so that he may live a fuller life at home.  With his breathing apparatus at the side of his bed, Robin’s broken spirit begins to lift, as he enjoys (the best he is able) life with Diana, son Jonathan, and a cute but mischievous dog.  As Robin’s vigor returns, he begins to dream.  Soon mutual friend and inventor Teddy Hall (played by Hugh Bonneville) concocts a wheelchair able to carry Robin’s breathing machine.  Cavendish spends the remainder of his life (which didn’t end until 1994) as a tireless advocate for the disabled.

It’s a heartwarming story of love, despair, and utter determination – by both Robin and Diana.  Claire Foy’s performance is almost as strong as Garfield’s – and he’s one of our best actors working today.  Unfortunately, “Breathe” falls victim to the TV movie syndrome.  The facts are presented well, but we don’t receive much insight into the mind of Robin Cavendish.  We practically check off the milestones of Robin’s life – marriage, polio, anger, resentment, softening of the heart, and so forth.

“Breathe” is by no means a bad film, but for a comparison, consider James Marsh’s 2014 biography of renowned scientist Stephen Hawking, “The Theory of Everything.”  In that picture, Eddie Redmayne and Felicity Jones hit home runs as the cantankerous but socially awkward genius and his supportive yet occasionally contrary wife.  There are scenes in that movie I will remember the rest of my life.  I may forget “Breathe” by Oscar season.

Again, “Breathe” is heartwarming, and the performances are good, but it’s simply not as gripping a tale as I would have liked.  There are some good scenes, like when Robin, Diana, and Teddy show off the newfangled wheelchair to the patients in Robin’s old polio ward.  And the ending is a tearjerker, yet it’s not maudlin.

My favorite scene takes place when the family vacations in Spain.  Robin’s breathing appliance develops an electrical issue during a drive along a beautiful mountain road.  Some of the party stays with Robin, while others drive to the nearest city to call Teddy.  During his stay (of several days) alongside the mountain road, some of the locals stop by to comfort and encourage their disabled visitor.  One evening, a couple guitarists begin to play and sing.  Next thing we know, the Spanish and their British guests are dancing, drinking, and having a wonderful time.

Not bad, but should have been better

I love the spontaneity and joy of that scene.  If only there could have been more such moments in “Breathe.”  The end result is predictable, and not particularly inspiring, given its subject matter.  I won’t advise you to not see “Breathe,” if you are so inclined.  But it will be on Netflix soon, and that’s probably where it belongs.