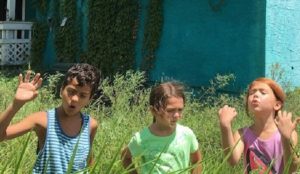 Within walking distance of Disney World, one finds some of the cheapest, run-down motels in the country – the fictitious Magic Castle among them.  Some of the rooms are inhabited by those who cannot even afford low-rent apartments.  Sean Baker’s new film “The Florida Project” introduces us to their lives – and not in a condescending manner, but to familiarize us with a societal underworld most of us don’t even notice as we race to be first in line at the Magic Kingdom.

Fantastic newcomer Brooklynn Kimberly Prince plays a precocious but cunning six-year-old named Moonee.  Wise beyond her years, Moonee spends each day of her summer vacation seeking new adventures – sometimes innocent childish fun (putting a dead fish in a pond to see if it will come back to life), sometimes harmful (switching off the power to the whole motel), and occasionally illegal (setting fire to a nearby abandoned tenement building).  Moonee’s partners in crime are Scooty (Christopher Rivera), the son of her mother’s best friend, and Jancey (Valeria Cotto), who lives with her grandmother in a neighboring motel.

Baker intentionally introduces us to the kids first, then slowly introduces us to the adults in their lives.  Moonee’s mother Halley (newcomer Bria Vinaite) is a short-tempered, lip-pierced, chain-smoking carcass of tattoos with no marketable skills and no hope for any life above the lowest rung of societal existence.  She reminds me of Sasha Lane’s Star in last year’s “American Honey” – only not as smart.  Given Halley’s limitations, Baker and co-screenwriter Chris Bergoch skillfully edify not only her love for her daughter but also the risks she will take to provide her some semblance of a decent life.  When Halley scores a lot of money one day, her and Moonee’s subsequent Walmart shopping spree is something to behold.

Unfortunately, Halley is not above pestering guests at a more upscale motel (selling them perfume she’s bought wholesale), nor engaging in downright illegal activity (selling vacation/timeshare “rings” and then stealing them back to sell to others).  She doesn’t know when to keep her mouth shut, and she drops F-bombs at the most inopportune times.  Likewise, Moonee is wont to scream at those she believes have wronged her, beginning with, “Hey lady…!”

Like mother, like daughter.  And to a fault here.  Possessing a strong sense of revenge, we believe Halley to be no more mature than Moonee.  In a brilliant directorial decision, Halley and Moonee dance to the local hip-hop radio station one night in their room – each moving her body the way we see teenage girls do on Facebook.  Moonee is acting twice her age; Halley half hers. 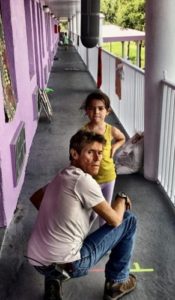 Presiding over all this activity is hotel manager Bobby – the single greatest performance veteran actor Willem Dafoe has ever given (and yes, I know he played Jesus).  Bobby cracks down on his lodgers when he must, but he also protects them from outside influences.  In one memorable scene, he discharges a vagrant from the hotel property to keep his residents from potential harm.  He’s seen plenty of Halleys and Moonees come through his hotel, but he can’t quite dissociate himself from their personal lives.  It’s a “fine line” performance that easily could have been played too rough or too milquetoast, and Dafoe walks it masterfully.

Yes, “The Florida Project” is episodic in nature, but I loved the depiction of the routine of the daily lives of the characters.  Interspersed with the adventures of Moonee and her friends are short scenes of Baker’s characters simply living out their daily lives – Halley and Moonee selling perfume in parking lots, Bobby repairing and improving the motel, Moonee and friends’ constant pursuit of free food, and so forth.  These are the scenes which give “The Florida Project” its proverbial glue, as well as its magic – and which keep it from progressing like a novel.

“The Florida Project” is a true achievement in filmmaking, and stands as this year’s best picture so far.  It reminds me of last year’s “American Honey,” in which British filmmaker Andrea Arnold perfectly captured an intentionally forgotten segment of Americana.  Here, Sean Baker has laid bare the lives of so-called white trash in the same way “Moonlight” acquainted us with the lower end of the African-American experience.

The fact that Disney World is mere minutes away is not lost on viewers.  In fact, the final shot of the film is one you won’t soon forget.  “The Florida Project” is a real treasure.