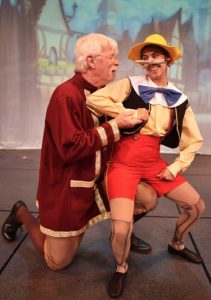 It takes magic to bring a wooden puppet to life, but the Beef & Boards Pyramid Players will know just what to do this fall in their production of Pinocchio.

The famous tale of a wooden puppet who yearns to be a real boy enchants audiences young and old in a one-hour musical adaptation opening Oct. 13 at Beef & Boards Dinner Theatre, and on stage through Nov. 11.

Come to Old Italy, where the kind-hearted puppet maker Gepetto dreams of having a son. To grant his wish, the Blue Fairy brings his wooden puppet Pinocchio to life, and the adventures begin. Like many boys, Pinocchio gets into all sorts of mischief, until he is lured to the Land of Toys by a villain Coachman. Time is running out for Pinocchio to escape before he is turned into a donkey!

Jaddy Ciucci stars as Pinocchio, with Ken Klingenmeier as Gepetto, and Christine Zavakos as the Blue Fairy. Rounding out the cast are Michael Davis as the Pizza Maker, Thomas Cardwell as the Coachman, Bradley S. Kieper as Signore Gatto (the cat), Theresa Koleszar as Angelina, Jennifer Ladner as Gino, Logan Moore as Signore Volpone (the fox), Joshua L. K. Patterson as the Balloon Seller, Collin Poynter as the Organ Grinder, Jenny Reber as Candlewick, and John Vessels as Antonio. The show is directed by Eddie Curry, with musical direction by Kristy Templet.

Pinocchio is the final production in the 2017 Live Theatre for Kids series at Beef & Boards. Pyramid Players productions are one hour in length and presented without intermission. Performances are for all ages, but offered particularly for children in preschool through sixth grade. Children have the opportunity to meet the cast after each show for pictures and autographs.

Pinocchio is sponsored in part by Chick-Fil-A at The Pyramids.