German folk group Milky Chance will be appearing Tuesday, October 17th at 8:00 PM in the Egyptian Room at the Old National Centre.

Their first single, “Stolen Dance,” was released in April of 2013, peaking at #1 on charts in multiple countries including Austria, France, Belgium, Switzerland, Poland, Czech Republic, and Hungary.  It also won the Live Krone radio awards for Best Single.

Their debut album Sadnecessary was released in October of 2013, with singles such as “Down by the River.”  The album peaked at #14 in Germany, and in 2014 SPIN named Sadnecessary their Album of the Week.  SPIN further described the leading single “Stolen Dance” as a “serenely rollicking crossover jam,” clarifying that “the great majority of Sadnecssary follows the song’s pattern of low-octane beats and gently lapping guitar strumming. 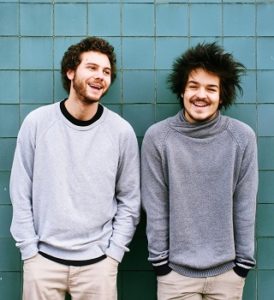 Milky Chance made their TV debut on Jimmy Kimmel Live! in October of 2014, and also won the European Border Breakers Award that month.  They started a tour of North America in late 2014, performing at venues such as the House of Blues and at festivals such as Coachella Valley Music and Arts Festival.

Milky Chance has once again made it seemingly impossible to improve on their unique signature sound. After the tease out of “Blossom,” “Ego,” “Doing Good” and “Cocoon,” of which the latter has racked up over 8 million hits on YouTube and 43 million Spotify plays since November, Blossom is finally here. This is the band’s follow-up to runaway debut album Sadnecessary, which received gold certification in the U.S. Running parallel to their album, the band has been slowly unveiling its innovative and inventive “Blossomentary,” in which fans have the ability to interact with Milky Chance in several different ways, including designing artwork, asking the band questions and taking a personalized quiz.

Tickets to the October 17th show are $30.00 in advance, or $35.00 the day of the show.  Contact the Old National Centre box office or visit www.milkychance.net.