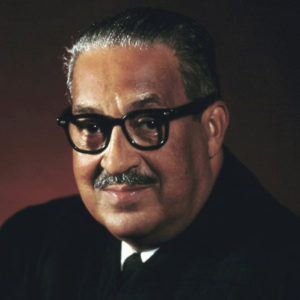 Reginald Hudson’s new film “Marshall” is misnamed.  First, it gives the impression it’s a biography of Supreme Court Justice Thurgood Marshall.  Instead, it is a re-telling of a specific case early in Marshall’s career.  Second, it should be called “Friedman” – the name of the insurance lawyer forced to try the case when the judge refuses to allow an out-of-state attorney (Marshall) to speak in his courtroom.

Chadwick Boseman (who has already portrayed Jackie Robinson and James Brown) turns in a fine performance as the young gifted NAACP attorney assigned to represent a potentially falsely-accused black man in a murder trial in Connecticut.  Josh Gad (who played Le Fou, Gaston’s sidekick in the recent live-action “Beauty and the Beast”) plays Sam Friedman, the young Jewish insurance lawyer personally chosen by Marshall to assist in the case.  When the judge (James Cromwell) throws the defense team a ringer (that Marshall must keep his mouth shut), it falls upon Friedman to try the case.  As a civil attorney, Friedman has never tried a criminal case before, and he leans heavily on Marshall’s expertise.  But the two make it work – Marshall even writing cross-questioning strategies on paper for Friedman to follow. 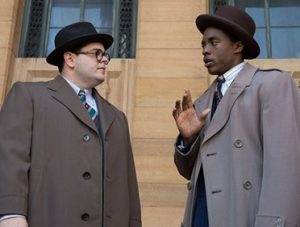 But Friedman is the central character here.  He’s the one who experiences personal growth; not Marshall.  Marshall is smart, intuitive, and confident at the outset; he’s smart, intuitive, and confident at the end as well.  But it’s Friedman is the character who learns something – about handling a criminal defense, and about the obstacles African-Americans were forced to face in 1941 America – even in the North.  If the academy nominates Gad for an acting Oscar, I certainly hope they place him in the proper category.  Gad (and Boseman) are both lead actors in this enticing production.

This all makes for a riveting courtroom drama, if not a biography of its declared subject.  And while I’m perfectly aware this film is based on an actual 1941 trial, “Marshall” does fall into the narrative trap of placing too many obstacles in the way of the protagonists.  First, the prosecution has assembled a team of slick attorneys (headed by Dan Stevens), while the defense rests in the hands of a brilliant civil rights lawyer not allowed to speak, and a nervous, inexperienced insurance attorney.  Then, even though the trial takes place in a northern state, the judge has an obvious bias in favor of the prosecution; he allows almost all their objections to stand, while overruling those of the defense.  Then the accused black man (Sterling K. Brown) turns out to have lied to Marshall and Friedman regarding a major facet of his testimony.  And so it goes.

Fun to watch Marshall at work

But Marshall’s intelligence, street smarts, and sheer ingenuity keeps the defense afloat.  Particularly fascinating is an early scene in which Marshall instructs Friedman to accept a wealthy society woman during jury selection, even though she runs in the same circles as the supposed victim.  Marshall’s reading of her body language is fun to watch.  I wish screenwriters Michael and Jacob Koskoff had thrown in more of these little human details, but for the most part, our interest is held throughout.

The acting is solid, and Hudson’s direction is good, if not predictable.  He lets the actors act – a “player’s coach,” if you will.  But I would have liked to have been presented with at least one of Thurgood Marshall’s flaws.  As a mere human, I’m certain he had some.  But they must have landed on the cutting room floor.

Overall, “Marshall” is a good effort.  It’s interesting, informative, and bound to be a real crowd pleaser.  I don’t know that I learned anything about Thurgood Marshall that I didn’t know (or couldn’t have imagined) before.  But “Marshall” works as a courtroom drama.  If I had to provide a recent comparison, I’d liken it to last year’s British drama “Denial.”  It too was a film that could have made a grander statement, but chose to play it safe by couching its drama in the form of a courtroom trial.  Neither is a bad film.  Each could have been a little better.