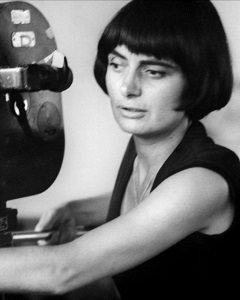 Agnes Varda was one of the key directors of the French New Wave movement of the late 1950s and 1960s.  Along with Jean-Luc Godard and Francois Truffaut, Varda changed the way motion pictures were made – by eliminating establishing shots, shooting on location with unknown actors, using hand-held cameras, and employing ambiguous narrative conclusions, among other techniques.  The idea was to present reality, rather than glossy depictions of the world as filtered through the proverbial Hollywood studio lens.  By the end of the 1960s, American directors were also filming in this raw, close-up, modern style.  (See Mike Nichols’ first four films.)

At age 88, Agnes Varda is not only still living (as is Godard), but she is still working.  Often favoring collaborative efforts rather than working as a solo auteur, this time Varda has created a self-effacing documentary called “Faces Places,” in which she and young French artist JR travel the French countryside to photograph everyday people and then plaster their images upon various public surfaces.  If this sounds odd, it is the crux of JR’s work – sort of temporary graffiti, if you will. 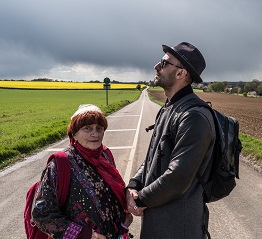 But rather than a documentary of JR and his work, Varda has inserted herself into the action, as she and JR work together.  She interviews their subjects, he photographs them, and his crew pastes the results to the facades.  So we see JR at work, but thanks to Varda, we learn something about each of the humans.  It’s an interesting concept, and it basically works.  Just don’t expect a film that moves mountains.  This is a small film; a documentary celebrating art and its relationship with humanity.

The “Faces Places” project takes Varda and JR to a small abandoned mining town, in which they affix photos of erstwhile mine workers to the exterior of the house of the town’s lone remaining inhabitant – the daughter of a former miner.  They visit a commercial ship dock and fasten huge photos of some of the workers’ wives to dozens of shipping crates.  Their travels take them to a fish market, where they glue pictures of fish to the local water supply tank.

But not all the connections are random.  Varda and JR also tour the hometown of Nathalie Sarraute, the author to whom Varda dedicated her 1985 masterpiece “Vagabond.”  And in the film’s final sequence, the pair attempts to visit Varda’s old friend Jean-Luc Godard.  Without spoiling the ending, their call parallels the ephemeral nature of JR’s artwork.  Unlike the “permanent” art displayed at the Louvre, JR’s work eventually detaches from its canvasses – and in one case by the ocean tide.

What is the purpose?

But this prompts one to ponder the point and purpose of JR’s art.  Ironically, Varda’s medium, film, is one which can be preserved for all posterity – especially with today’s digital technology.  Their collusion serves to perpetualize JR’s work – at least into a 90-minute documentary which can be viewed multiple times. 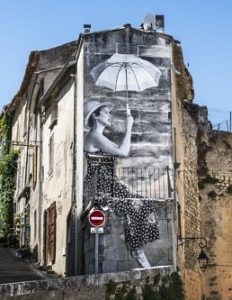 So “Faces Places” is a melding of two art forms – one fleeting, one durable – as well as a merging of generations.  At 88 and 33, Varda and JR are separated by at least two of them, and their banter serves to accentuate those differences even as they operate in service of a common goal.  She questions his choice to constantly don dark glasses, which prevent her from “reading” his eyes.  He temporarily forgets that she is unable to scale a flight of steep stairs at his speed.  My guess is she hates tattoos as much as he hates “Matlock” reruns.  It’s a fascinating association of artists as well as art.

Should at least be nominated

I hope the academy nominates “Faces Places” for best foreign language film.  In a cruel twist of irony, no Varda film has ever won as Oscar.  While she’ll receive an honorary Oscar this year for her body of work, it would be fitting for her to also walk away with the Best Foreign Language award (or even Best Documentary).  With three months left in the year, I could change my mind, of course.  But I’d still love to see Varda receive the recognition in the United States that she’s earned worldwide.